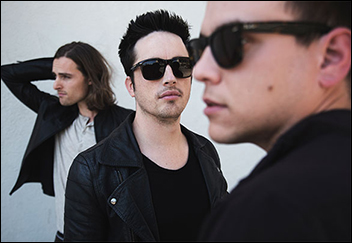 
Before entering their final year at the University of Virginia, they released a self-titled EP in August 2007 and several months later, the band changed their name to Parachute and contributed a song to the national TV campaign for Nivea. In 2009, they released Losing Sleep which marked Parachute's major-label debut and peaked at #40 on the Billboard charts. The band returned to the studio to record their sophomore album 2011’s The Way it Was followed by Overnight (2013) which hit the #3 spot on iTunes album charts and marked the band’s highest chart position, reaching #15 fifteen on the Billboard Top 200.


Parachute continues to tour around the country having performed with artists such as Kelly Clarkson, Gavin DeGraw, NeedtoBreathe and Andy Grammer. In 2013, they co-headlined a national tour with The Plain White T’s. They’ve also performed before crowds of over a million at a New Year’s Eve celebration in Times Square. Parachute has appeared on The Tonight Show with Jay Leno, Good Morning America, Jimmy Kimmel Live and CBS’ The Early Show. Their songs have been featured on MTV’s The City along with CW’s One Tree Hill, Vampire Diaries and 90210.


In May 2014, guitarist Nate McFarland announced that he was leaving the band to pursue his MBA at the University of Virginia's Darden School of Business. The band is going forward.


Parachute shared on their website, “We’re so excited to share the news with you! Our new album is called “WIDE AWAKE.” It comes out 3/11/16 and available for pre-order on iTunes this Friday.


Our new song is called “Without You.” It’s also available on Friday for download and streaming.


Finally, The Wide Awake Tour with special guest Jon McLaughlin goes on sale Friday January 15, 2016. You also get a digital download of our new album with every ticket purchase.”