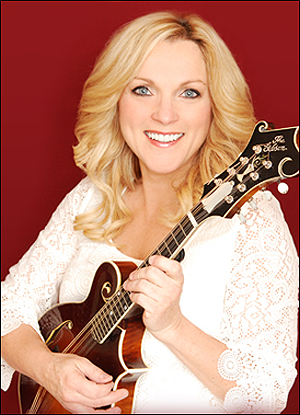 Nashville, Tenn. (CelebrityAccess) – The nominations for the upcoming 57th Annual Grammy Awards have been announced, and Rhonda Vincent is nominated for Bluegrass Album of the Year. Her 2014 release Only Me was received with high critical acclaim following its release, and now serves as a final contender for the highest prize in the music industry – garnering Vincent her sixth Grammy nomination. After debuting at #1, where it spent its first two weeks on the chart, the album has proved to have legs. Only Me continues the long line of history-making success that Vincent has enjoyed. Each of her past eight discs hit either No. 1 or No. 2 on the Billboard Bluegrass Album chart.

The half country/half bluegrass album features duets with both Willie Nelson and Daryle Singletary. Vincent reached #1 on the Bluegrass Unlimited National airplay chart for the months of November and December with her songs “Busy City” and the Willie Nelson duet title-track “Only Me.” Vincent also tips the covers hat to acts such as George Jones & Melba Montgomery (“We Must Have Been Out Of Our Minds”), Jack Greene (“I Need Somebody Bad”), Connie Smith (“Once A Day”), and Bill Anderson (“Bright Lights and Country Music”)

Rhonda Vincent has been one of the most consistent recording artists in the world of Bluegrass Music, winning the IBMA Female Vocalist of the Year award a remarkable seven consecutive times, and walked away with the top honor of IBMA Entertainer of the Year in 2001. With her band, The Rage – they are the Most Award Winning Band in Bluegrass Music History with over 80 awards. They maintain one of the busiest schedules in the music business today, recently hitting a personal record number of bookings for 2015.

The 57th Annual Grammy Awards are set to take place on February 8, 2015 in Los Angeles at the Staples Center.