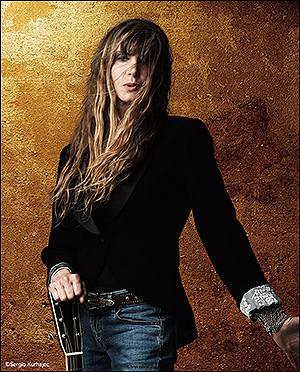 (CelebrityAccess) EDMONTON, AB – Stony Plain Records announces a November 18 release date for Rory Block’s new CD, Keepin’ Outta Trouble, the sixth album in her “Mentor Series” saluting the blues masters who’ve had a profound impact on her music. This time she pays tribute to Bukka White, one of the most influential country blues artists in history, bringing the soul and meaning of White’s songs to life as if heard for the first time since they were written and performed by the man, himself.

Rory Block is one of the most-acclaimed acoustic blues artists. She has won five Blues Music Awards in the “Traditional Blues Female Artist” and “Acoustic Blues Album of the Year” categories from The Blues Foundation.

Keepin’ Outta Trouble: a Tribute to Bukka White, was produced by Rory Block and Rob Davis. All guitars and vocals are performed by Rory Block, who also plays various percussion parts, including: “guitar bongos,” plastic storage tubs and boxes of Quaker Oats with wooden spoons and plastic salad forks. Rory uses her Martin Signature Model guitar throughout with a 14 mm deep well socket for a slide.

“I met Bukka White in the back room of a Greenwich Village night club one evening in 1965,” recalls Block of her first meeting. “His face was like a painting. He exuded awesome power and intensity. He had a huge presence even though he was not particularly tall. Clearly he’d been down a thousand roads. Watching him perform was transformative. Bukka had absolutely no mercy on the guitar and slammed it like Paul Bunyan wielding an axe.”

Rory Block displays her own brand of ferocious guitar playing on the tracks of the new CD with interpretations of White’s tunes, as well as original songs inspired by Bukka White’s sound.

“Recently, I asked a friend who knew Bukka if he could tell me a little more about him,” she explains in the album’s liner notes. “My friend’s answer was evocative, and ultimately I wove the essence of his tales into the songs I wrote for this recording (though they are not factually accurate as much as artistically inspired). The day and time in which the blues was born was a unique universe. Bar room brawls, traveling outlaws and a certain amount of mayhem was common place. It made for incredibly interesting folklore, but in the end what transcended everything was the music.

“More than any other artist in my ‘Mentor Series,’ Bukka inspired me to write new songs. His hammering groove led me down a syncopated path of unfolding ideas, and before I knew it the start of another Bukka song had digressed into a new melody with a story inspired by the largeness of Bukka’s energy.”

Rory Block also describes in her notes the process of recording the new album, how the sequencing ultimately was determined and White’s place in blues history. “At first we sequenced the songs in the order in which I recorded them. This usually makes sense because when choosing the next song I look for a different tempo and key. Originally the first several songs started as Bukka tracks, but almost immediately morphed into stories using his life and music as the launching point. Later, we rearranged the order to get to Bukka’s classic material sooner. However I kept the first two originals in the lineup, ‘Keepin’ Outta Trouble’ and ‘Bukka’s Day,’ because in these songs I am a kind of opening act, attempting to lay the ground work with a little imagined biography. Then we get to Bukka’s material: ‘Aberdeen Mississippi Blues,’ ‘Fixin’ To Die Blues,’ ‘Panama Limited’ and ‘Parchman Farm Blues.’ The energy of the old timey groove in Bukka’s recordings (from which this tribute is inspired), attests to why the early players had such power and strength. I always say that no one will ever be Bukka, or Son, or Robert… but it’s good to try!”