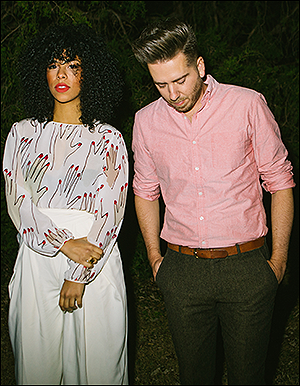 (CelebrityAccess) – Partisan Records is excited to announce the release of Awake and Pretty Much Sober, the debut full-length album from multi-instrumentalist and producer Jeremy Larson (aka Violents), and vocalist Monica Martin (of Phox). Colorful, effervescent, honest, and emotive, the record turns the traditional "duets album" on its head, offering up its own version of electronic-influenced pop music along the way.

The pair recorded Awake and Pretty Much Sober in Nashville, where Larson had already produced several Violents EPs featuring different female vocalists. With Martin, he found a particularly unique collaborator. After recording some initial demos, the two realized they were onto something special, something different, something deeper. Something that, like the album's own title, was filled with both the clear-headed clarity of an early-morning wakeup call and the lovely, woozy swoon of a buzz that had yet to clear.

Stacked with string arrangements, electronic samples, pop melodies, bursts of piano, layers of vocal harmonies, and blasts of brass, their collaboration bridges the gap between two musicians from different ends of the musical spectrum. (Larson is a classically-trained pianist, string arranger, songwriter, and multi-instrumentalist, while Martin is a vocalist who spent the previous half-decade fronting the Midwest folk-popband Phox.) Those different backgrounds come together on album highlights like "How It Left," where an R&B groove run beneath airy, atmospheric synths, and "Equal Powers," a slow-motion dance song that blends computerized drums and orchestral washes of strings with Martin's own elastic voice.

To be released on Partisan Records on April 28th 2017, Awake and Pretty Much Sober explores the different stages of a relationship, from the optimistic rush of new love to the sobering challenges that arrive months later, after the so-called honeymoon stage has come to a screeching halt. The album's 10 songs cover an equally wide range of ground, from the soft-edged swoon of "Spark" – a piano ballad that shows off Larson's classical chops -to the sparse, beat-driven bounce of the closing track, "It Won't Stop."

"This is Jeremy's world I'm stepping into," shares Martin, who traveled to Larson's home studio in Tennessee to record her vocal tracks. "He produced it all; wrote the lyrics, melodies, and the arrangements–not to mention he played all the instruments on the tracks." she adds, "I'm happy to be the voice to carry his words." Meanwhile, her musical partner likens the process to a movie set, with Martin starring as the lead actress and Larson – a man who's always done his best work behind the scenes -pulling triple-duty as screenwriter, director, and crew.