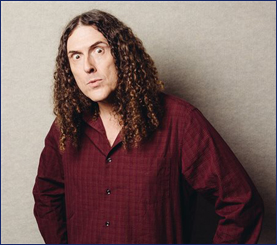 LOS ANGELES (AP) — Attention pop stars: If "Weird Al" Yankovic shows up at your concert or has tracked down your personal email address, you're likely his next parody conquest.

Such was the case for artists like Pharrell and Iggy Azalea, who are covered by Yankovic in his latest album, "Mandatory Fun."

For his 14th studio effort, released last week, Yankovic had his heart set on Williams' No. 1 smash "Happy." When he didn't hear back from Pharrell's camp, he decided to go straight to the source.

"I somehow got Pharrell's home email address — I won't say how — and I emailed him and asked if I could do the parody," recalled the 54-year-old comedian. "He couldn't have been nicer and he said he was honored to have me do the parody."

Sometimes a face-to-face plea was necessary. Yankovic flew to Denver and waited backstage at Azalea's concert to get permission to use her summer hit "Fancy."

"I talked to her as she was literally walking offstage. I introduced myself, 'Hi. I'm "Weird Al" Yankovic and I would love to do a parody of "Fancy,'" he said. "The next morning I was in the studio recording."

Yankovic's efforts paid off: Billboard reported that "Mandatory Fun" will debut at No. 1 — his first — this week with more than 80,000 units sold. That's almost double the amount his last album, "Alpocalypse," sold in its debut week in 2011.

In a recent interview, Yankovic discussed the surprise success of his new album — which also features covers of Robin Thicke's "Blurred Lines" and Lorde's "Royals" — and the accompanying music video-turned-viral hits.

AP: Can you believe the album's initial success?

Yankovic: This has been an amazing week. I can't even tell you. I have been doing roughly the same thing for many, many years, and this is the best week of my life in terms of like the response from people. It's just insane and it's extremely gratifying. It's hard for me to wrap my head around (it).

AP: You released eight music videos in eight days. Were you inspired by Beyonce, who dropped 17 videos with her surprise album last year?

Yankovic: It irks me this much when people say, 'Oh you're doing a Beyonce' because, you know, three years ago, when my last album came out, I did a video for every single song on the album, released it all at once, and nobody was saying to Beyonce, 'Oh you're doing a little "Weird Al" there are you?' So, you know, I'm sure I wasn't the first one to do that, but I did it before Beyonce. I just want to set the record straight.

AP: Unlike other parodies, you've never gone the mean-spirited route.

Yankovic: I'm a fan like everybody else. When I do my parodies it's not meant to mock these people. It's not meant to belittle them or make them look bad. It's an homage. … I don't think you need to be hurtful to be funny.

AP: Not everyone is as good-natured as you are, especially on social media. How do you deal with negative feedback?

Yankovic: There's always going to be trolls and people being negative and, you know, it's hurtful. I wish I could say that it bounces right off of me, but part of it sticks. But thankfully I've got so many other people on Twitter that are extremely positive that it more than balances it out.

AP: Will this be your last album?

Yankovic: I hate to draw lines in the sand and say this is absolutely the last album, but it sure looks that way. It's the end of my record deal. I've been under contract since 1982 and I just kind of feel like especially with the kind of music that I do, the album format isn't the best way to deliver that music. … I'm going to try to jump on new hits and new trends as soon as I can (with singles) and try to be a little bit more competitive with everybody else in the world on YouTube.

Yankovic: Even if I knew I couldn't tell you. But after I've mastered an album and it's done and in the can I really shut my brain off. I don't think about parodies for a while.

AP: What about Beyonce? You have yet to cover her music.

Yankovic: She's on the list. I'll get there eventually because then they will say, 'Oh you did a Beyonce.'