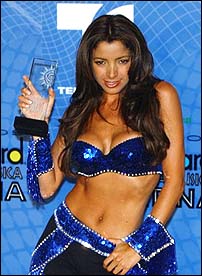 Chayanne and Montenegro performed their hit songs, and megastars Ricky Martin and Thalia also were among the Latin music artists who took the stage Thursday night at the Miami Arena.

Chayanne, a veteran singer and actor who starred in the 1998 film "Dance With Me," won Latin track of the year — the top award for an individual song — for the single "Y Tu Te Vas (And Then You Leave)." The song also won pop airplay track of the year, and his work "Grandes Exitos" earned the best greatest hits album award.

"I'm super grateful for the awards, super happy," said Chayanne, whose next album, featuring songs in English and Spanish, is expected to be finished in September.

Montenegro, whose song "Quitame Ese Hombre (Take Him Away From Me)" became an anthem for women, won female pop airplay track of the year. An alternate version of the song won for regional Mexican track of the year for a female solo artist and for a new artist.

She performed her hit song in a glittery two-piece blue outfit — with her band and a group of male dancers wearing black cowboy hats in the background.

Mexican star Thalia won the female pop album of the year for "Thalia" and the Telemundo Viewers Choice award. She wore a flowing red dress and signed autographs for the adoring red carpet crowd, some of whom tossed flower petals at her.

Ricky Martin was honored with Telemundo's "Star" award and performed the song "Tal Vez" (Maybe). His next album is set to be released in Mexico next week. He said he has dedicated himself to a project that finds and protects abused children.

Brazilian singer Alexandre Pires was the hot Latin tracks artist of the year, the top honor given to an individual performer. Pires showed up without a date and sang his love song "Ama Me" (Love Me).

The upstart Spanish trio Las Ketchup, tied with Montenegro for most nominations with seven, won two new artist awards for pop album of the year and tropical-salsa airplay track of the year for their best-selling song "Asereje," known to English listeners as "The Ketchup Song (Hey Hah)."

Colombian rocker Juanes, whose "Un Dia Normal (A Normal Day)" won for male pop album of the year, could hardly be heard during his acceptance speech. He said he visited a hospital briefly for treatment for hoarseness after performing this week in Miami.

Latin rock mainstays Mana won the album of the year award in the genre for "Revolucion de Amor" (Love Revolution).

The awards honor the most popular albums, songs and performers in Latin music as determined by sales and radio airplay data published on Billboard's weekly charts. It was the first time the glitzy awards were open to the public.

Elvis Costello will receive the American Society of Composers, Authors and Publishers (ASCAP) Founders Award on May 20 at the Beverly Hilton Hotel in Beverly Hills, CA, as part of the 20th annual celebration of ASCAP's Pop Music Awards on Tuesday. The award is given to pioneering songwriters who have made exceptional contributions to music.

Among some of Costello's most memorable songs are: "Allison," "Watching the Detectives," "Less Than Zero, "Pump It Up," "Radio Radio," "Everyday I Write the Book," "The Only Flame In Town," "Almost Blue," "Veronica," "Deep Dark Truthful Mirror," "God Give Me Strength", among many others.

"Elvis Costello is a defining voice in pop music, both as a singer and songwriter," said Marilyn Bergman, ASCAP president and Chairman of the Board. "His work is consistently marked by a level of intelligence, passion and integrity that places him in the top ranks of musical artists of our time. We are very proud to honor him with the ASCAP Founders Award."