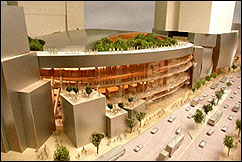 British band Barclays agreed to pay $400 million over 20 years for the naming rights to the 18,000-seat stadium, to be called the Barclays Center, before these concerns were raised by state assemblyman Hakeem Jeffries, according to the New York Times.

Barclays’ accusers claimed the bank was involved in both the slave trade and, more recently, the apartheid regime of South Africa. A spokesman for Barclays denied both claims.

In remarks first reported in The Brooklyn Paper, Jeffries, who supported the $4 billion Atlantic Yards project, said, “Of all the companies in the world to pursue a naming rights agreement, Barclays is inappropriate to be in a borough which has one of the largest populations of African descent in this country.”

He said he would discruss the agreement with developer Forest City Ratner officials. “All options should be on the table, and those options should include termination of the agreement or Barclays compensating the community for wrongs” of the slave trade, he told the paper.

Letitia James, a city councilwoman who has opposed the arena project, told the Times, “The reason that Barclays is the largest bank in the world by total assets is because their assets represent fruit from a poisoned tree.”

Peter Truell, a spokesman for Barclays, told the paper, “Claims that Barclays was founded on the profits of slavery are untrue.” He also said that Barclays withdrew from South Africa in 1986, six years before the end of apartheid, and was one of the first to return to the country in 1995, after the fall of apartheid.

“Indeed, David Barclay, who was a partner in one of the primary Quaker banks in the 1770s that eventually merged to form Barclays, was opposed to slavery,” Truell added.

In an 1801 book entitled “An Account of the Emancipation of the Slaves of Unity Valley Pen, in Jamaica,” David Barclay wrote, “Having been a slave owner, and much dissatisfied in being so, I determined to try the experiment of liberating my slaves; firmly convinced, that the retaining my fellow creatures in bondage was not only irreconcileable with the precepts of Christianity, but subversive of the rights of human nature.” –by CelebrityAccess Staff Writers