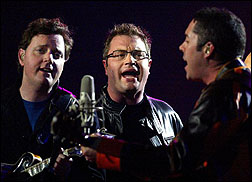 Understanding this sales figure requires looking beyond the numbers on the charts, according to Terry McBride, band manager and CEO of the Nettwerk Music. McBride notes BNL released their album on their own artist-run label, Desperation Records, in multiple formats, from physical CDs to digital albums, deluxe editions, USB flash drives, ring tones, multi-tracks for remixing, streams, etc. Not only is revenue generated from all of these outlets, but also the percentage the band actually sees is significantly higher since they own their Intellectual Property.

Barenaked Ladies Are Me, the first original album in three years from BNL, charted at #17 in the US with 36,811 albums sold and #7 in Canada with 8,008 albums sold. In addition to a physical album, the band found it important to make their songs available to fans in a wide variety of ways…from digital albums to a 27-song deluxe edition (physical in Canada/digital in US), individual tracks, USB flash drives and even vinyl.

"Nettwerk and BNL are trying to get people to see beyond the physical number," says McBride "Generating revenue, especially in the artist-run model, is
about selling music in various mediums, selling concert tickets, licensing music to TV, ring tones, packed USB drives, etc. That is how success is measured, not by the physical album sales."

McBride notes that missing from the regular sales charts are individual digital track sales, digital albums purchased directly from the BNL, Nettwerk and MySpace websites, the combined sales of the standard album and Deluxe Edition, USB flash drive sales, ring tone sales, stem sales from their remixing contest and more. "Additionally, you won’t see the difference in revenue that a band generates from an artist-run label as opposed to a band on a major label; an artist-run label can earn as much as $5 per album," he explains; "once all of these missing entities are factored together, a difference
close to 30% of North American sales is missing from the chart equation.

"The artist-run model is the future. If we can break bands using this model, the industry will be forever changed," McBride continues. "We are making a music company, not a record label." –Bob Grossweiner and Jane Cohen