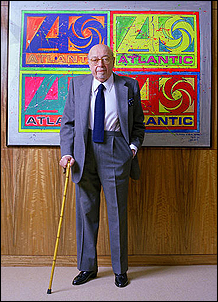 Clive was a lawyer. Mo was an accountant. But Ahmet was always a music lover.

Ahmet didn't get into the business by accident. He NEEDED to be in it, he needed to get CLOSER! Because he was infected, and the only way he could be cured was to sign acts, write songs, produce records, be involved, IMMERSED in music.

Ahmet was no different from you and me. It wasn't about the money, he needed to own the disc and go to the club, he needed to revel in the notes. Yes, he was a man of taste, and eventually wealth, but money was never his prime motivation, rather it was the SOUND!

I believe I first came across Ahmet when I started to wonder what that credit was, you know, the songwriter who was named "Nugetre". What kind of name was Nugetre? Where did they find such a person? Certainly no one with such a strange name could write a hit song, he should be off in a foreign land, smoking unfiltered cigarettes. But then I found out that Nugetre was a pseudonym, that those songs were really written by one Ahmet ERTEGUN!

How did you pronounce Ertegun? Was it just like it was spelled, or did I need some kind of decoding box. Kind of like reggae. I remember reading about the island sound in "Time" in a library carrel at Middlebury. Was it gae like in "gay", as in the euphemism for homosexual? Or was it gae like in "gie", you know, like Reggie in the Archie comic books. I needed to get it right. Especially if I wanted to be an insider. I couldn't commit a faux pas. I needed to be COOL!

But no one I knew had any contact with this impresario. And there was no Internet. It was just a name on the records.

And what records they were!

I was too young to be around at the time of Atlantic's inception. When I came across those Atlantic LPs, the company name was already established in my mental lexicon. No different from Columbia or Capitol, a MAJOR BRAND!

This was when logos still appeared on the front cover, before the acts took control and they were banished to the back side. I'd sit and look at that Young Rascals album, with the modern logo, as "I Ain't Gonna Eat Out My Heart Any More" poured out of the one speaker "stereo" in my bedroom.

But then there was the day my sister Wendy wanted to buy a single at Barker's, on the Post Road in Westport. She couldn't exactly pronounce the name, it came out something like 'Arathea". But this hit disc, it too was on Atlantic, the 45 featuring a red and black logo, which the company ultimately embraced for all their product, but not until years later.

And what was Atco? Was this a whole different company? Why did they need two companies? Was Atco the discount version? And, if so, why did this stepchild feature Cream?

I'd study the covers, the liner notes. I wasn't surprised that Led Zeppelin came out on Atlantic, with the red, white and green label, since the company had ALL the hip English bands. But I finally realized who Ahmet Ertegun was when he wooed the Rolling Stones.

The Beatles had broken up. The Stones had always lived in their shadow. But, with "Beggars Banquet" and "Let It Bleed", which featured not only "You Can't Always Get What You Want", but the ETHEREAL "Gimmie Shelter", the Stones had truly staked their own claim, they were no longer single makers, they MATTERED, and they were OUT OF THEIR CONTRACT! And the negotiations for a new label were all over my bible, my newfound addiction, the folded magazine "Rolling Stone". Yes, this debonair TURK, who wore suits, who looked OUT OF PLACE, rumor had it he was going to sign the Stones. And he did. Even though supposedly he offered less money. You see, Mick needed to be on Atlantic.

And once the band switched to Atlantic, via their own vanity label, they had their true breakthrough record, "Sticky Fingers", with the anthem "Brown Sugar". Yes, the weekend didn't really begin until you'd had a few beers and the needle dropped into the groove and you threw your hands up at the appropriate moment and went WHEW! God, how did we all know to do this? I guess it was INSTINCT!

And then Ahmet Ertegun was a fixture. Always on the scene.

But I didn't have personal contact until 1989, when the phone rang, and his assistant said he wanted to talk to me.

And not like a sophisticate, not like an urbanite, but a true record man, Ahmet got on the phone and told me that Alannah Myles record I'd written about, the one I said had stalled, it was going to NUMBER ONE!

And "Black Velvet" did.

It was like I'd been visited by a God. An all powerful seer. It's not a moment I'll ever forget. But it was trumped by an interaction at a LifeBeat event at the old Marineland, on the Palos Verdes Peninsula, in the late nineties. Daniel Glass had invited me. But I found myself hanging with the Atlantic folk, Val Azzoli, Ron Shapiro… And seated at the round table, in the open air, was the legend and a lady friend. The newbies were ignoring him, like he was their grandfather and they'd felt obligated to bring him along, but didn't want anything to do with him.

With such an opening, I plunked my ass right down next to him. And started to speak.

I've learned to temper it a bit recently. Because royalty can't handle irreverence, can't handle someone playing on their level. But this was almost a decade back, when I had to be me all the time, and within moments of sitting down, I was hassling Ahmet.

Oh, I was giving him good-natured shit. Ribbing him. But Ahmet rose to the occasion.

After I accused him of ripping off his dentist to start the label, of weaseling his way into the business, Ahmet said that that wasn't true, that if only I were interested, he'd tell me the REAL story. And upon declaring that OF COURSE I was interested in the true history of Atlantic Records, Ahmet set out to detail it, incident by incident, year by year. It was like listening to a living encyclopedia. But I could interact, I could ask questions.

And Ahmet wasn't talking down to me. It was like we were in it together.

And after about half an hour or so, some of the newbies left their conversations about the evanescent crap they were releasing and gathered 'round and started to listen in.

The label was working Duncan Sheik. Which Ahmet pronounced "SHAKE". Ahmet said the new music was crap. That Mr. Sheik had been booked at this venue in Paris, owned by his old friend, and that he was almost embarrassed to have him playing there.

You see this guy would book whomever Ahmet told him to. This guy TRUSTED Ahmet. So when Ahmet told him to book Sonny & Cher, this guy did. But, then there was a frantic phone call from overseas. You see they were WHITE! Everybody Ahmet had recommended previously had been BLACK! He couldn't have a white act at his club!

But Ahmet convinced him. And the act delivered.

And suddenly it was me and Ahmet against the newbies. We were in it together, with the kind of camaraderie you've got with your best friend, your drinking buddy, the guy you grew up with.

But finally, after about an hour, Ahmet's lady friend implored him to leave.

Ahmet stood up. Said goodbye. And started to walk off.

But after going five or six steps, Ahmet turned around. And walked back to where I was sitting. And took his cane and rapped it on my chair, and looked me in the eye and smiled. And then took off again.

I never talked to Ahmet thereafter. I might have seen him at an event, but I was afraid to go up and say hi, for fear he wouldn't recall me. I wanted to remember that magic moment. When we were brothers.

And I always thought it was so sad that Nesuhi predeceased him. How Ahmet must be lonely. How he'd outlived so many of the buddies he used to run with.

But now Ahmet's joined them at the table. No doubt wearing a dapper suit. He might not be playing in the band, but you KNOW he put it together.

And it's hard to stop. I can take solace in the fact that due to modern recording equipment, his legacy, those RECORDS, will live on. But I want to leave you with one of his famous quotes. Something you should never forget. That's not about beats, or genres, but boils it down to the sheer essence.

Yes, Ahmet used to say that a hit record was something you heard on the radio at midnight, while lying in bed in your pajamas, that made you jump up, put on your clothes and run to the all night record shop to buy.

Our fearless leader is gone.

But his memory, his ethic, it lives on.