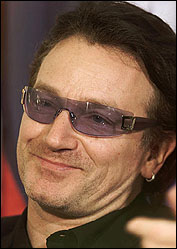 U2 frontman Bono has been named the 2003 MusiCaresPerson Of
The Year. Bono, chosen for his accomplishments as a
musician and as a humanitarian, will receive the honor at a
special tribute dinner, concert and silent auction held at New
York's Marriott Marquis Hotel on February 21, 2003. The
MusiCares tribute dinner is one of the most prestigious events
held during GRAMMY Fest, a month-long cultural celebration that
culminates with the 45th Annual
Grammy Awards on February 23 at Madison Square Garden. The
Awards show will be broadcast live on CBS-TV.

"Bono is a living symbol of what the MusiCares Foundation and
the Recording Academy stand for — his musical accomplishments
are matched only by his endeavors to effect positive change on
the human condition worldwide," said Garth Fundis, Chairman of
the Recording Academy. "We truly are privileged to be
honoring this gifted and dedicated visionary."

U2 released its first record in 1980 and have
since sold more than 100 million albums worldwide, won 14
GRAMMY Awards — including two consecutive Record Of The Year
awards at the 43rd and 44th GRAMMY Awards — and six Brit
Awards. Last year, U2 was awarded MTV's Lifetime Achievement
Award and was honored by the Brits for "Outstanding
Contribution To Music." U2 has supported Amnesty
International,
Greenpeace, and the Burma Action Campaign.

Since 1998, Bono has been an active supporter of the
International Jubilee 2000 Drop The Debt Campaign, which seeks
to forgive the unpaid debts of the world's poorest countries
to
mark the new millennium. He has used his celebrity to get the
media
to pay attention to debt, poverty and AIDS in Africa, and to
get access to the world's most powerful politicians.

He has spent the past three years lobbying international
politicians and organizations including George W. Bush, Bill
Clinton, Tony Blair, Thabo Mbeki, the International Monetary
Fund and the World Bank in support of these worthwhile causes.
In 1999, he went to Rome to join forces with Pope John Paul
II
to persuade the Group Of Eight richest nations to increase
debt
cancellation. In 2000, he joined Nigerian President Olusegun
Obasanjo to present the world's largest petition (24 million
signatures) to UN Secretary General Kofi Annan, calling for
much more debt cancellation for the poorest countries. In
2001, he helped bring together American music artists
including Destiny's Child and Puff Daddy to record Marvin
Gaye's "What's Going On?" to raise money and awareness to
fight
AIDS in Africa. This year, he helped lobby for an increase
in
overseas aid to Africa, which resulted in a promise from
President Bush to increase aid by an extra $5 billion a year
for poor countries. Bono also spent two weeks on a
widely-publicized trip with US Treasury-Secretary Paul O'Neill
to Ghana, South Africa, Uganda and Ethiopia to make the case
for more money for AIDS treatment and to fight poverty.

Along with Live Aid's Sir Bob Geldof, Bono is currently
involved in setting up a network called DATA (Debt, AIDS,
Trade
in Africa) that will target rich governments to increase
resources and improve their policies toward African countries.

MusiCares was established in 1989 by the Recording Academy in
an effort to focus the resources and attention of the music
industry on human service issues that directly impact the
health and welfare of the music community. Proceeds from the
annual Person Of The Year tribute provide essential support for
MusiCares' Financial Assistance Program that ensures that music
people have a compassionate place to turn to in times of
financial, medical and personal hardships.