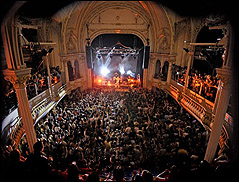 BOURNMOUTH (CelebrityAccess MediaWire) — The Opera House in Bournemouth has become the latest acquisition for UK venue operator Academy Music Group, following the successful grant of a new lease with Arnewood Estates Limited. AMG takes over from Arnewood Estates which had operated the venue as the Grand Theatre under the rubric of FJB Hotels, the Bournemouth Echo reported.

"We feel AMG will really put it the map. It’s a beautiful building and I'm sure AMG took one look at it and thought they should add it to their portfolio." Sue Hyder, financial controller for Bournemouth-based Arnewood Estates told the Echo.

1,925 capacity venue will be renamed to the O2 Academy Bournemouth and AMG expects that once its up and running in September, that it will host approximately 150 events a year.

"The venue is beautiful," said AMG CEO, John Northcote, in a statement. "It's in great condition and we're looking forward to making some minor operational improvements but primarily bringing the same vibrant diary of live acts and club events that people expect from AMG venues, filling a significant gap in the market."

The building is more than 100 years old and features classical art-deco styling and most recently saw a multi-million dollar rehab in 2007.

Academy Music Group is one of the leading venue operator in the UK and counts among its shareholders, Live Nation. The company operates numerous venues in cities throughout the UK, including London, Glasgow, Newcastle, Liverpool, Sheffield, Birmingham, Bristol, Leeds and Oxford. – CelebrityAccess Staff Writers