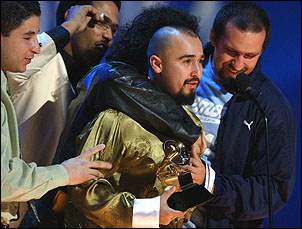 (CelebrityAccess MediaWire) –Charges against two members of Los Angeles afro-Latin collective Ozomatli and their manager, have been dismissed in an agreement with Austin, Texas prosecutors.

On March 18, 2004, Ozomatli bassist Wil Dog Abers, percussionist Jiro Yamaguchi and band manager Amy Sue Blackman Romero were confronted by Austin police during this year's South by Southwest Music Conference when the band took their music to the streets, unaware they were violating a city noise ordinance.

Yamaguchi’s felony charge was dismissed on July 8 and is no longer pending. Jiro, through his attorney, Bobby Earl Smith of Austin, pled “no contest” to Class C simple assault on July 7 and was placed on 180 days deferred disposition, meaning that the Class C charge will also be dismissed if he commits no offense during that time period.

Romero’s Class B misdemeanor charge was dismissed on July 15. On July 7, her attorney entered a plea of no contest on her behalf, and she was placed on 180 days Class C deferred disposition, which is also subject to dismissal after 180 days if no new offense is committed.

Abers pled no contest through his attorney and was placed on six months Class C deferred disposition for the original charge of failure to obey a lawful order.

Under the laws of the State of Texas, higher charges against Yamaguchi and Romero and each of the Class C charges are subject to expunctions of the records of arrest if the terms of the Class C deferred dispositions are fulfilled.

In a prepared statement, Ozomatli said: “We are relieved that we can all get on with our lives, however our cases are not closed to us until they are rightfully expunged from our records. We are very grateful to (attorney) Bobby Earl for handling this high profile case with such poise and for getting the charges dropped. This was a harrowing experience and a frightening thing to have hanging over our heads. We are also still shocked and outraged that it ever escalated to the point that it did, and that we were jailed and criminalized in the first place. We are musicians and we were just playing music when this whole thing spiraled out of control. We still maintain the police misjudged the situation and grossly overreacted. We did not hurt anyone or break any laws. However we needed to get this cleared from our plate. We have an extensive world tour around our new album and we didn't want anything to stand in the way of our commitments to our music and our fans. – Bob Grossweiner and Jane Cohen