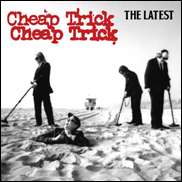 CHARLOTTESVILLE, VA (Hypebot) –
On Thursday' Cheap Trick manager David Frey published a scathing attack on the collection and sale of artist data by Soundscan and others. Bruce Houghton wrote a rebuttal on Hypebot suggesting that the culprit was not too much data, but rather the lack of artist access to it. Last night Frey responded:

"Thanks for the constructive criticism.

The point is that the band simply didn't want SoundScan to track this release.

I certainly didn't mean to come off whining and complaining, I'm not, and I agree with most of what you've written here.

And this was also written in reply to a prior post on this topic.

In my opinion (Cheap Trick's) "The Latest" is a record and there's never been a better time to be in the record business, The Latest has exceeded our expectations.

The distributor(s) of The Latest, including Tunecore provide us with fantastic information on who is buying what.

So in my opinion SoundScans' only stake in the band's new self release is to sell what I view as the BAND's information to others.

I called SoundScan in advance asking them to ignore this release, but "they can't."

And you're right, this is an old topic, from an excerpt from thesis on Strategic Information Management:

"Given the ‘hit-and-miss’ nature of the music business, a key competitive edge for a trendsetting retailer like Newbury Comics is knowing what will sell, and then selling these products aggressively and exclusively within a short window of time. As Dreese of Newbury Comics discovered, among the beneﬁciaries of the information provided by SoundScan are intermediaries like Handleman. Handleman credits SoundScan with getting them detailed information that it uses for inventory planning and replenishment at the stores of clients like Wal-Mart. Once Newbury Comics realized to what extent its mainstream competitors such as Wal-Mart were beneﬁtting from the precise regional data that it shared with SoundScan— information which these competitors could never compile on their own— it ‘pulled the plug’ and stopped sharing information with SoundScan."

So I figured why couldn't Cheap Trick simply "pull the plug" like Dreese did?

And now that I've poked the bear I'll concede that I'm an information predator also.

I've paid for information on the band's fans; who bought what, when, how, and all that, and it's been tremendously useful. When a show is put on sale or an amazon.com promotion is scheduled I've arranged for info on who bought before, even did the; "if you liked this band you'll probably like that band" program.

I simply feel that the only entity who should message any band's fans is that band themselves. So to me Cheap Trick buying information on Cheap Trick's fans is okay, but others may not be.

And again, this is only my opinion on an old topic." – David Frey