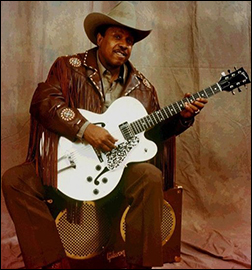 CHICAGO (CelebrityAccess) — Lonnie Brooks, a legendary blues artist who successful transitioned from country blues to playing a key role in the Chicago blues scene died on April 1st. He was 83.

"With the deepest sadness, we the Baker Brooks family announce the passing of our father, Legendary Blues musician Lonnie Brooks at the age of 83 in Chicago, IL on 4/1/17. Please respect the family's privacy during this time of grief."

Born Lee Baker Jr. in St. Landry Parish, Louisiana in 1933, Brooks learned banjo at an early age from a family member but did not actively consider a career in music until he moved to Texas in the early 1950s and was exposed to artists such as B.B. King and Clarence "Gatemouth" Brown. His first job as a professional music came from zydeco legend Clifton Chenier, who hired Brooks after hearing him playing guitar on his porch.

After embarking on a solo career, Brooks headed to Chicago in the early 1960s, where he adopted the stage name Lonnie Brooks and began recording a series of singles for labels such as Mercury and Chess.

In the mid-1970, Brooks became one of the early artists to record on Bruce Iglauer's influential Alligator Records, which would become his label home for the rest of his life.

Brooks continued to tour and record. His 1980 cover of the Robert Johnson classic “Sweet Home Chicago” would go on to become an unofficial anthem for the city.