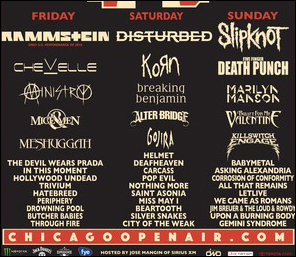 The performer bill for Chicago Open Air will feature more than 40 bands, including Rammstein (the group’s only 2016 U.S. performance and first Chicago show since 2012), Chicago’s own Disturbed (who recently returned from a 4-year hiatus with their #1 album Immortalized), global rock juggernauts Slipknot, Chevelle, Korn, Five Finger Death Punch, Ministry, Breaking Benjamin, Marilyn Manson, Of Mice & Men, and many more. The festival will also include Gourmet Man Food featuring local and regional cuisine, a craft beer village highlighting top brews from the region, other entertainment and fan experiences, and will be hosted by Jose Mangin from SiriusXM.

The official Chicago Open Air Pre-Party will be held at Concord Music Hall on Thursday, July 14. Otep headlines the show with Shaman’s Harvest, Islander and Through Fire supporting.

Chicago Open Air is produced by Danny Wimmer Presents, Live Nation and Toyota Park, with the support of the Village of Bridgeview and Bridgeview Mayor Steven Landek. Festival doors open at 11:00 AM each day and the show ends at 11:30 PM on Friday, 11:00 PM on Saturday, and 10:00 PM on Sunday.

Headbangers Beer Hall, Kuma’s Corner (burgers), Monster Energy Experience/Sampling, Jack Daniel’s Experience are included with The Music Experience which features all the elements that are involved in making music in a professional band setting. The interactive exhibit features guitars, basses, amps, drums, keyboards and electronic gear that are used by today’s most popular bands. The Music Experience has autograph signings and artist interactions throughout the day. Check Facebook and Instagram for the latest info on who will be hanging out at The Music Experience.