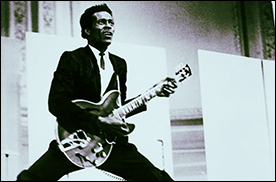 (Hypebot) – Album sales and song sales on titles from Chuck Berry exploded after news of his death on Saturday, March 18th. The rock and roll pioneer was 90.

Overall, Chuck Berry album sales increased 9,581% after his passing. His album sales average was 39 per day prior to his death and jumped to 2,054 the day of his death and then to 3,808 the day after, according to BuzzAngle Music.

Two-thirds of those album sales were for his best of album, "The Definitive Collection."