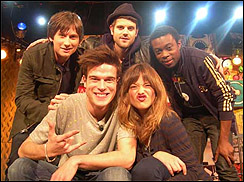 VANCOUVER, CA (CelebrityAccess MediaWire) — A planned free concert by the Canadian band Bedouin Soundclash was scrapped at the last minute after officials declined to issue a permit to event organizers.

The concert had been planned in front of and to benefit Insite, a supervised injection site in Vancouver's downtown. Insite is a controversial site that allows heroin users a safe place to inject heroin but has been the target of aggressive criticism from the federal government, which wants the site shut down. Organizers for the event had sought permits earlier in the day but had been denied under a city traffic regulation.

The band and a crowd described by local press as in the hundreds still made the scene though, but the city stepped in before they could start their performance and pulled the plug, with work crews commencing to dismantle the stage that had been erected.

The city cited concerns about traffic and safety as the Insite office fronts onto a busy street and according to police spokeswoman Jana McGuinness, event organizers had been offered an alternative location a short distance away in a less busy street but declined.

"They did not wish to take us up on the offer of that street closure." McGuinness told the Canadian press. – CelebrityAccess Staff Writers