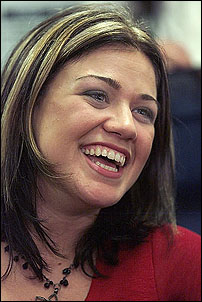 The highly successful "American Idol" tour has produced at least one curiosity. Kelly Clarkson was the winner of the television show and obviously the star of the tour; however, she is not performing her single "A Moment Like This" on the tour. Instead, she is singing its B-side "Before Your Love" and two r&b standards "A Natural Woman" and "Respect," both from the Aretha Franklin songbook.

The New York Times reports that an executive involved with the tour said the omission of her hit single was to hold it back for inclusion in her likely solo tour in the spring. The Times also reports that a spokesperson for her manager Simon Fuller denies that the song was being withheld to spur sales of a solo tour.

Ticket sales have not been hurt by the omission of the song, but fans are bewildered.