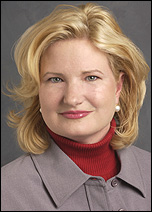 In her new position, Dollinger will handle public relations for all of Clear Channel's
divisions. As one of her first move, Dollinger hired New York-based Brainerd
Communicators to assist the company with media calls.

SAN ANTONIO (AP)–Clear Channel Communications on Wednesday reported lower earnings in the first quarter, but its results were in line with expectations.

The biggest revenue boost in the quarter came from its outdoor advertising division–primarily billboards–which increased 22 percent to $450.5 million. Much of that growth came in Europe and Australia, company officials said.

Revenue from radio was up 1.6 percent to $795 million, with most of that increase coming from the acquisition of four radio stations. but the company's live-entertainment division slipped 8 percent to $437.9 million.

The San Antonio-based company would not offer guidance for the second quarter, saying there were too many changing factors in the advertising market.

Clear Channel operates about 1,200 radio stations and 19 television stations in the United States, and has an ownership stake in 250 radio stations overseas. The company is also the world's largest producer of concerts and other live events, and has major interests in billboards.