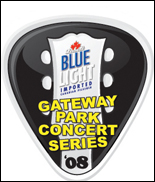 NORTH TONAWANDA, NY (CelebrityAccess MediaWire) — The promoter of a what used to be called the Labatt Blue Light Concert Series, cancelled the last two shows of the season after losing the event's primary sponsor and liquor license.

Both the August 23rd Loverboy show and the Rik Emmett of Triumph gig planned for August 30 have been scrapped Vincent Lesh of Concerts Plus, the events promoter, announced on Wednesday.

The concert series, originally staged at Gateway Harbor Park, ran into trouble when an undercover police operation charged to concession vendors with selling alcohol to minors, leading the State Liquor Authority to pull the event's temporary liquor permit the Buffalo News reported. Shortly after that, the series' primary sponsor, beer maker Labatt USA announced that it was pulling out of the event. Subsequent attempts to locate another sponsor proved fruitless.

"Unfortunately, due to the massive financial loss incurred at the Aug. 2 concert, our main sponsor pulling out of the series and no beer permit in hand," Lesh said in a written statement, "we have been left with no other option except cancellation.

"We appreciate the continued support we have received from the people and business owners of North Tonawanda," Lesh added, "and hope that we can find some resolution to this matter allowing us to produce more concerts at Gateway Park in the years to come."

Although the city had in February signed a 3-year deal with Concerts Plus and Metropolitan Talent Presents to continue the concert series, the future of the event is at present, in doubt.

Other concert series planned for Gateway park on Wednesday and Friday nights are unaffected and will go on as planned. – CelebrityAccess Staff Writers