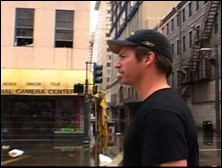 New Orleans native Harry Connick Jr has agreed to be honorary chair of Habitat for Humanity's "Operation Home Delivery," a long-term rebuilding plan for families victimized by Hurricane Katrina in the Big Easy and along the Gulf Coast.
"It is hard to sit in silence, to watch one's youth wash away," said Connick. "Everything that I have professionally, and so much of what I have personally, is because of this great, fair city … to see it being drowned like this is almost unbearable."

Branford Marsalis, a fellow New Orleans native, has also joined the team and agreed to be honorary chair of the New Orleans Habitat for Humanity efforts. The two have been friends since childhood, and Connick was a student of the Marsalis patriarch, Ellis Marsalis.

"When the world's attention turns way from this disaster, there will be tens of thousands of New Orleaneans without a place to live," said Marsalis. "Working with Habitat to help people rebuild their homes and their lives is a constructive way to channel this mind-numbing pain."

Connick, who has previously volunteered with Habitat for Humanity in New Orleans, said that after the initial crisis subsides, he would focus on rebuilding homes. As honorary chair, he will represent and speak for the program, as well as encourage citizens, organizations, churches, foundations, governments and others to get involved.

"Harry Connick is an icon in New Orleans and he has become a symbol of this tragedy and the spirit of recovery and rebuilding," said Jonathan Reckford, chief executive officer of Habitat for Humanity. "Everyone looking for a ray of light, of hope, got it when they saw him walking through the devastated streets of New Orleans, tears in his eyes, confident that New Orleans will bounce back.

"None of us will soon forget his characterization of the people of New Orleans being 'freakishly strong and passionate,'" Reckford added. "He demonstrated that himself by his actions. In addition, to have Branford Marsalis offer to help us as well is most humbling. These are things sought in prayer, and yet they have come true for us and for the people so desperate in need of the lasting help Habitat can provide."

With Operation Home Delivery, Habitat plans a three-stage response to the hurricane: First, to help Habitat affiliates in the path of Katrina's destruction restore some level of service. Then seek to serve as a catalyst with other organizations, governments, corporations, foundations, etc., to bring people together to talk about low-income housing and recovery on a scale that Habitat alone would be unable to do, and third, to establish and implement the "home in a box project," where Connick's impact may be the most significant.

With this, Habitat for Humanity will assemble the materials needed to build a house — either purchased or donated — and then, working with affiliates, churches, corporations and others in communities all over the country, volunteers, working with building specialists, will "pre-build" the frame of a home over a few days. The house will be tacked together to ensure a rock-solid fit, then the frame will be taken apart and the components placed, along with other necessary construction materials, in a container and shipped to an area along the Gulf Coast or New Orleans where families, volunteers and builders will rebuild the home.

In addition to chairing Habitat's program, Connick will film a public service announcement to help raise funds for the rebuilding effort. Marsalis has also agreed to film a PSA and then will appear with Connick in a third public service announcement. In an appearance recently on "How You Can Help" on CNN's "Larry King Live," Connick praised the global nonprofit home-building ministry for its work and encouraged people to write checks, to volunteer, to support the work any way they can."

"We had no words when he mentioned Habitat," said Reckford. "He was speaking so personally and to be included in such a heartfelt and emotional plea … what is there to say beyond, 'Thank you?'"

Habitat for Humanity plans to pilot "Operation Home Delivery" and the "home in a box" concept this month in Jackson, MS, working with the local Habitat affiliate and others. An appeal for hurricane recovery and reconstruction donations has been launched to get efforts under way and Reckford noted that, using those donations, Habitat would build as many homes as it can fund.

The homes will mirror traditional Habitat homes, simple, decent places to live, providing approximately 1,100-1,300 square feet of living space. "These are not mansions by any means," said Reckford, "but to the homeowners, they will be palaces."–Jane Cohen and Bob Grossweiner