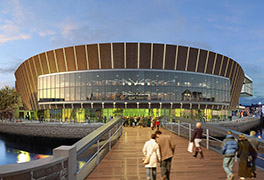 CORK, Ireland (CelebrityAccess) — A funding deal has been reached that may pave the way for construction to start later this year on the long-delayed €73m Cork Events Centre.

According to the Irish Examiner, the deal would see the state provide an extra €10m, on top of the €20m it pledged three years ago, for construction of the 6,000-capacity venue. The deal would also include an increase in funding from developers BAM and the venue’s proposed operators, Live Nation, which could also be worth as much as an additional €10m the Examiner reported.

“Both BAM and Live Nation have worked together to increase the available funding and reduce costs,” BAM boss Theo Cullinane told the Examiner. “These initiatives, together with the necessary public funding, make it very likely that the project can now proceed.”

News of the deal comes more than two years after a groundbreaking ceremony at the future site of the Event Centre. The project has been beset by delays, including revisions to the venue plan, and attendant soaring cost for the project.

“It has been a frustrating and difficult process,” Tánaiste Simon Coveney, Minister for Foreign Affairs and Trade and Deputy Leader of Fine Gael, told the Examiner. “But if we didn’t have that sod-turning, we wouldn’t have had the commitment from all sides that was needed to see this through. I promised, last month, that we would find a new approach to get this project over the line. I am very confident, now, that we can provide the certainty that’s needed.”