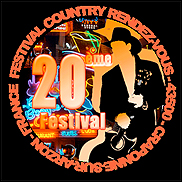 CRAPONNE ON ARZON, FRANCE (CelebrityAccess MediaWire) –Craponne Festival, the biggest festival in France, and one of the biggest in Europe with an attendance of 25,000, is celebrating 20 years on July 27-29.

“This is a non-profit festival," says longtime festival producer Georges Carrier, "and we are all volunteers. Trisha Walker-Cunningham buys the Nashville artists ,and I buy the Austin acts with the help of Gary Hartman, PHD, unless they are managed out of Nashville. She and I have worked together for most of these 20 years and it is truly a great partnership.”

The festival is broadcast by RTL, Europe's biggest radio station, and is also covered by television. The Cherryholmes, Trent Wolman, Joe ely, Rhett Akins and The Derailers are among the performers.