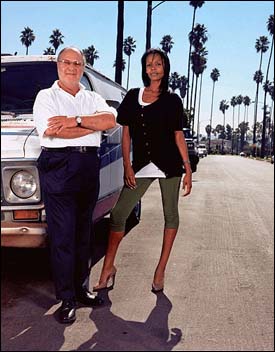 LONDON (CelebrityAccess MediaWire) – Some in our industry may find it amusing that a promoter who went bankrupt once, and eloquently eluded bankruptcy a second time, will host Britain’s newest reality show, "Get Your Act Together With Harvey Goldsmith." The show airs on UK’s Channel 4 March 27 at 9pm, and most agree it will make for great TV.

Goldsmith’s old pal, Bob Geldof and Geldof’s Ten Alps TV, produced all six episodes, which follow Goldsmith as he advises six struggling entertainment businesses on how to turn around their fortunes.

Goldsmith is in no need of a television show to get across the point that he is a star in his own right, just ask anyone who as ever dealt with him. The man’s a force of nature, and many an agent and manager will attest to that.

Goldsmith, who became a household name on the back of his "ass-kicking" while putting together the bills for Live Aid in 1985 and Live8 20 years later, will no doubt once again be operating on a short fuse as he plans his latest venture, his most audacious to date.

In tandem with Al Gore, the former US Vice President and Oscar-winning presenter of the ground-breaking eco-documentary, An Inconvenient Truth, Goldsmith is this summer mounting "Live Earth", a Live Aid-style series of concerts to raise awareness about climate change. It promises to be even bigger and better than his last two gargantuan "global jukeboxes".

No artists are confirmed as yet, but one persistent rumor suggests that the reformed Police will headline.

In "Get Your Act Together With Harvey Goldsmith," Goldsmith will attempt to revive the career of Irish pop star Samantha Mumba, rebuild a working men’s club with dwindling membership and huge debts, help heavy metal band Saxon climb back up the ladder to popularity, rebuild Paulo’s, which is Britain’s oldest family circus. He will also attempt to get Big L Radio, a radio station with listenership on a downward spiral, back on track and finally help a husband and wife opera business to be come successful and profitable.

In one scene Hurricane Harvey is battering the Deighton Working Men's Club, and Jimmy, the frightfully nice, but not hugely sorted manager of the club, doesn't know what's hit him.

For the purposes of “Get Your Act Together with Harvey Goldsmith,” Jimmy is attempting to turn round the club's fortunes. He has organized an audition of talent to set before the celebrated promoter, Harvey Goldsmith.

Jimmy was supposed to bring in the cream of the Northern club circuit, but the only acts he has managed to assemble for the try-outs are a seven-year-old girl in a Manchester United shirt singing Lean on Me and two eight-year-olds in pink doing rock-and-roll dancing. Goldsmith is not impressed.

"You're taking the piss!" he rages in the bar afterwards. "It's bloody nonsense. It's supposed to be talent for the club to benefit from, not a kids' afternoon competition. You've got young kids you can't even let into the club to perform! What are you wasting my time for?"

Jimmy, looking close to tears, can only sit there, mumbling into his pint of lager, "I don't know what to say."

Goldsmith told UK’s Telegraph that he didn't get where he is today by being mealy-mouthed. He laughs that during the making of Get Your Act Together with Harvey Goldsmith, "I had rows with all the subjects." Watch for an especially lively ding-dong between Harvey and Biff, the lead singer of Saxon, after the heavy metal band's cringe-making attempt to break the world air-guitar record during half-time at a Sheffield Wednesday match. It may well wear out C4's bleep machines.

"There's a lot of pride at stake, so all the subjects kicked and screamed," says Goldsmith. "But you have to make them understand that there is a very good reason why they're not getting the success they feel they deserve.

"It would have been very easy to say, 'You're a bunch of f***wits' and walk away, but you can't have success without fire in your belly. My job was to relight that fire, and the acts were angry with me because I had to find a way of getting the best out of them without actually killing them!"
Taking a final puff on his cigarette, Goldsmith concludes: "It's very simple with me. I'm prepared to listen to other people, but if I think I'm right, I'll fight tooth and nail until I get my message over. I'm a street fighter." He pauses, before adding with a broad grin: "I've never, ever accepted the word 'no'.

David Munns, Chairman of the award committee, praised Goldsmith’s career: “Harvey Goldsmith has been part of the fabric of the British entertainment industry for over 40 years. His passion, enthusiasm and energy for producing great music events are as strong as ever, so is his voice! Harvey has consistently set the bar high for other music event producers to follow. His contribution to the music industry and the good causes it supports makes him a distinguished 15th recipient of the Music Industry Trusts’ Award.”

Harvey Goldsmith began his career as a promoter in 1966 and by the end of the '60s had created such events as the Crystal Palace Garden Parties and the 14 hour Technicolor Dream. A decade later the concerts had moved to the largest Stadiums – establishing Wembley Stadium as a major destination for the top artists of the world and helping London to become the Number One City for popular concerts.

As Harvey's career expanded so did the diversity of his projects. He promoted the first major global TV event, the Concerts for Kampuchea in 1978 featuring such artists as Paul McCartney, Queen and The Who. Set at Hammersmith Odeon, the event raised over $2 million from worldwide sales. In 1985 the pipe-dream of Live Aid was turned into a £140 million fundraising venture within ten weeks by Harvey Goldsmith and Bob Geldof, Uniting the World with Music as never before. Live Aid was the first ever "Global Juke Box"; two simultaneous concerts, one at Wembley Stadium and one at JFK in Philadelphia, with over 60 countries carrying 17 hours of television live.

Harvey has been instrumental in developing popular music as a successful means of fundraising. Following the success of Live Aid came various concerts in aid of Human Rights, including the worldwide Amnesty Tour, and it was because of Harvey Goldsmith Entertainments' expertise in staging charity events that this company was brought in as Executive Producers of the 1990 performance of "The Wall" in Berlin.

In recent years Harvey has explored the world of Opera. Luciano Pavarotti appeared for the first time in 1986 at Wembley Arena and agreed as part of his 30th Anniversary Celebrations in 1991 to perform a free concert in Hyde Park. This concert was a huge success (capacity 125,000) and drew attention to the many opportunities that London has in its great parks; Pavarotti himself returned in the '90s to perform again in the UK, at the Leeds Castle in Kent in 1993, and Manchester in 1997.

The 1992 Tribute to Freddie Mercury to increase Aids awareness was a major TV, as well as live, success. Also in this year Harvey became chairman of the first National Music Day, which was instigated to promote the importance of music for everybody. 1,500 musical events – both professional and amateur took place all over the UK.

In 1994 under the auspices of HRH The Prince of Wales and President Havel of the Czech Republic Harvey was appointed Executive Producer of The Prague Heritage Fund Gala Classical Concert. This concert featured Sir George Solti and artists Dame Kiri Te Kanawa, Murray Perahia and Gabriela Benackova and has been televised worldwide.

The name Harvey Goldsmith has become synonymous with The Prince's Trust. Created by HRH The Prince of Wales to help the underprivileged youth of the UK it is famous for The Prince's Trust Rock Galas which started in 1986 and has included such luminaries as Eric Clapton, Elton John, Tina Turner and Phil Collins.

The annual concert helps to focus upon the trust's achievements, and Harvey has always been the driving force behind this event. In 1993 Harvey was made Vice Chairman of the Prince's Trust Management Board.

June 1996 saw the first Rock event to be staged at London's greatest outdoor treasure, Hyde Park, since 1976. The star studded MasterCard Masters of Music Concert for the Prince's Trust (capacity 150,000) starred Eric Clapton, Bob Dylan, Alanis Morrisette and featured the live premiere of The Who's Quadrophenia with an all star cast.

Shows promoted in 1996 included the phenomenally successful Lord of the Dance starring Michael Flatley, commencing with a world tour in October followed by a tour of the USA. This year Cirque du Soleil gained its largest audience capacity to date and was the most successful run of any show at the Royal Albert Hall.

The beginning of 1999 saw the return of Cirque du Soleil's Alegria to the Royal Albert Hall. In February Harvey once again promoted Sheryl Crow at Wembley Arena, and in May Bruce Springsteen and the original E Street Band played 5 sell-out UK shows including 3 at Earl's Court. In June 1999 Harvey produced London Mardi Gras, an open air Festival held at Finsbury Park.

In October 1999 Harvey produced for Cisco Systems Net Aid at Wembley Stadium featuring Robbie Williams, David Bowie, Catatonia, Bryan Adams, The Eurthymics, The Stereophonics, Bush, The Corrs and George Michael. This show was a catalyst to encourage the public to log on to the UNDP's Internet Site, which dealt with issues of "Extreme Poverty". To date over 60 million people have logged on to the site.

During his 35 year career in the Music Business Harvey has been associated with nearly every major artist in the world. He is Europe's leading major event producer and is one of the few promoters who is able to work with Classical as well as Rock and Pop. – CelebrityAccess Staff Writers