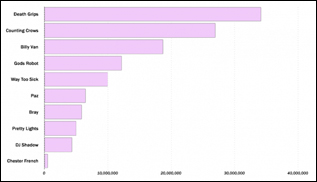 SACREMENTO, CA (Hypebot) — The artist with the most popular "legal" download on BitTorrent was just dropped for leaking his album. Death Grips’ music was downloaded over 34 million times over the BitTorrent protocol earlier this year, after which BitTorrent (the company) proclaim that Death Grips topped the list of “legal” downloads over the network, which has a reputation for trafficking in music without permission.


Here’s where things get confusing. Death Grips reportedly leaked its No Love Deep Web album on October 1. However, BitTorrent told Evolver.fm that it pulled the data leading to the above chart on September 19. So either BitTorrent was talking about Death Grips’ previously-released music, in which case the leaked album would have nothing to do with the band’s impressive download count, or reports that Death Grips leaked its album to via BitTorrent on October 1 are wrong.


Update: Death Grips’ publicist tells us, “As I understand that data, it was compiled before the release of the most recent album.” BitTorrent confirms that the 34-million-plus “legal” downloads occurred before Death Grips leaked its new album. So reports that the leaked album was the item that made Death Grips so popular on BitTorrent are not accurate.


What doesn’t appear to be up for debate is that Death Grips pre-released its album without the permission of its label, Epic, part of Sony Music — one of the three remaining major labels. Epic dropped the band last week, casting doubt on speculation that this whole thing was one big promotional stunt (as in “Hey, download this ‘leaked’ album, how punk rock am I?”) Madonna and other stars have been accused of leaking their own albums to attract attention, but it’s unlikely that a label would go so far as to drop a band from its roster as part of a publicity stunt.


The last straw, apparently, was Death Grips’ publication of an angry email from Sony Music on its Facebook page, although that email indicates that Epic was none too pleased about the leak. The issue that led to the whole thing was that Sony wanted to wait to release the album, and the band did not. As such:


“Epic Records is a music first company that breaks new artists,” reads Epic’s statement to Pitchfork. “That is our mission and our mandate. Unfortunately, when marketing and publicity stunts trump the actual music, we must remind ourselves of our core values. To that end, effective immediately, we are working to dissolve our relationship with Death Grips. We wish them well.”


We have now confirmed with both the band’s publicist and BitTorrent that the 34-million-plus downloads that made Death Grips the top legally-traded artist on BitTorrent took place before this album was leaked.


“This bundle was released via BitTorrent Inc’s two main properties: BitTorrent and uTorrent in Spring,” said BitTorrent’s spokeswoman. “The number reported [in the chart above]… reflects downloads-to-date tallied in late September. This is what was tracked as having been legally downloaded via our bundle offerings.”


And there you have it: Death Grips became the top “legal” artist on the BitTorrent network without this leak, which occurred later on bit torrent and other sources.