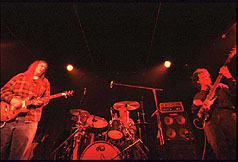 Due to overwhelming European demand, the Seth Yacovone Band is interrupting its 2002 American tour this week to leave for its second tour of Italy in less than a year.

The Burlington, VT, trio — praised in music magazines both domestically and internationally for its explosive blues-rooted sound — is adding Switzerland to its four-week overseas summer tour of festivals and clubs. The band, which also includes bassist Tom Coggio and drummer Steve Hadeka — last played Italy for a three-week run in October.

"The main thing I'm looking forward to about this Italy tour is getting a chance to play our music for lots of new people in new places who don't often get the opportunity to see us," said Yacovone. "This creates a whole different kind of dynamic between the band and audience, which makes us play music differently than we normally would. I expect lots of hard work, travel and great food. I expect little amounts of sleep, laundry and air conditioning. I expect to get the tremendous opportunity to express ourselves musically in front of people. And I expect to leave a little there and take a little back."

The band's tour of Italy and Switzerland tour is once again being produced by Only a Hobo Productions, the Italian promoters who originally discovered the band after reading about them in Buscadero Magazine. Only a Hobo promoter Carlo Carlini decided to bring back the trio due to pressure from fans who had either seen the band in October or heard about its fall Italian tour.

"I was getting pressed so hard from the fans, that I decided to do another tour this summer," said Carlini. "I'm sure that this tour will spread more of the band's wonderful spirit and enthusiasm throughout Italy, and be a great occasion to demonstrate that the music of the Seth Yacovone Band deserves a bigger audience over here."

The band has been touring the East Coast all year behind its fourth CD, Standing On The Sound, and will return to the U.S. In late July for another series of high-profile club and festival appearances that will continue into the fall.

Foremost among the young trio's admirers is Phish guitarist Trey Anastasio, who describes 22-year-old Seth as an "incredibly soulful and a natural talent, not to mention a great guy. I loved this guy from the first moment I heard him play."