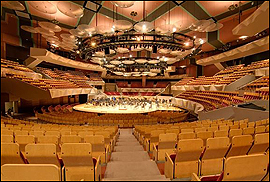 DENVER (CelebrityAccess) — The city of Denver is reconsidering plans for a major refurbishment of Boettcher Concert Hall and instead, weighing the option to build an outdoor amphitheater in its place.

The 2,600-seat concert hall is currently set to close at the end of the 2014-15 concert for a $17 million, year-long upgrade of the facility. However, as reported by the Denver Post, emails e-mails between the Colorado Symphony Orchestra and the Arts & Venues department suggest that talks are underway about demolishing the venue completely.

"I do believe that it's likely the best option — given the money we have to spend versus what needs to be done to properly renovate the hall," A&V director Kent Rice wrote in an email to CSO chair Jerry Kern.

In a subsequent statement, the CSO has attempted to dispel the notion that the hall's life may be coming to an end.

"The City of Denver's proposal to demolish Boettcher Concert Hall is out of step with the spirit of innovation and visionary thinking that define modern Denver. Great cities — and great leaders — respect and protect institutions while embracing change and growth. To even propose the demolition of a beloved community asset reflects a lack of both vision and leadership," a spokesman for CSO wrote.

According to the Denver Post, the idea of an outdoor amphitheater is not a new one for the city of Denver. City officials have expressed the belief that an outdoor amphitheater downtown would attract a more diverse audience than the Boettcher Concert Hall currently does. As well, the venue is not the best fit for the CSO, which typically only utilizes half of the venue's capacity on performance nights.