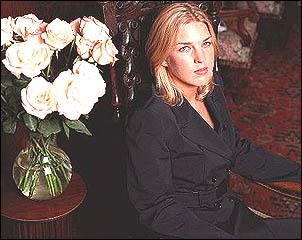 The black-tie event, which took place on March 8th at the Four Seasons
Hotel Vancouver, raised $65,000 more than the previous year’s fundraiser,
according to the VGH and UBC Hospital Foundation president and CEO Don
Livingston.

“To date, the events Diana has hosted on our behalf have raised over
$450,000 for the L/BMT Program. It’s an incredible story of peoples’
generosity toward a very worthwhile cause,” said Livingston.

Monies raised came from patrons who paid anywhere from $350 to $1,000 per
person to attend the event. The event featured unique silent and live
auction items such as a Chrysler Sebring Convertible (valued over $39,000),
an authentic performance outfit, worn and donated by Diana’s close personal
friend Sir Elton John, and a 10-day trip for two to Umberto Menghi’s Villa
Delia Cooking School in Tuscany (valued at $15,000). The evening culminated
in a very special performance by Diana Krall herself.

The Grammy and Juno-Award winning singer was inspired to support the cause
when her mother, Adella was diagnosed with multiple myeloma – an incurable
form of cancer that affects the immune system.

“After my mother underwent a successful bone marrow transplant in 1996 at
VGH the disease went into remission. Performing at this event is my way of
thanking and supporting the incredible caregivers in the L/BMT Program who
have taken such good care of my mom over the years,” Krall said. “I’m just
so grateful that I am in a position where I am able to contribute something
to this valuable cause.”

The VGH & UBC Hospital Foundation is a registered charity established to
raise funds for equipment, patient care programs, and medical research for
VGH and the UBC Hospital. The Foundation seeks to build partnerships with
community organizations, corporations and people who share a commitment to
quality health care.