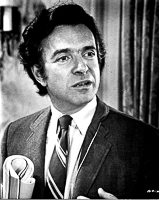 (CelebrityAccess)–Canadian-born director Arthur Hiller, who spent more than a decade mostly working in television before a career in feature films that included “Love Story,” “The Americanization of Emily” and comedy “Silver Streak,” died Wednesday. He was 92.

“Love Story,” based on the bestseller by Erich Segal, was an enormous box office hit in 1970 and was nominated for seven Oscars, including best picture. Though many critics dismissed the movie as too sentimental, it is No. 9 on the AFI’s list of the most romantic films of all time.

Hiller served as president of the Directors Guild of America from 1989-93 and of the Academy of Motion Picture Arts & Sciences from 1993-97. He received the Jean Hersholt Humanitarian Award at the 2002 Academy Awards ceremony.

The Academy of Motion Picture Arts and Sciences issued a statement. “We are deeply saddened by the passing of our beloved friend Arthur Hiller,” said Academy president Cheryl Boone Isaacs. “I was a member of the Board during his presidency and fortunate enough to witness firsthand his dedication to the Academy and his lifelong passion for visual storytelling.”

The DGA also addressed the news with statements on Wednesday. “We are deeply saddened to learn of Arthur’s passing. As a tireless crusader in the fight for creative rights and a passionate film preservation advocate, Arthur Hiller’s impact on the fabric of our industry will be felt for generations to come,” said DGA president Paris Barclay. “As Guild president, Arthur was a warm and nurturing father figure who was deeply concerned with the personal and professional well-being of every one of our members. Whether lobbying on Capitol Hill for the artistic integrity of filmmakers worldwide, negotiating with the studios to secure health and pension provisions for our families, or establishing the first committee to advance opportunities for women and minorities, Arthur’s passion was exemplary and inspiring. Our Guild is stronger because of him, and our hearts go out to his family at this difficult time.”

“Arthur’s presidency was marked by a singular passion for and deep moral obligation to the protection of our members’ creative and economic freedoms,” said DGA national executive director Jay D. Roth. “His spirited leadership as founding chairman of the Artists Rights Foundation in the early 1990s was instrumental in safeguarding against the physical alteration of our members’ creative work, both in film and television. As Arthur once said with his famously matter-of-fact panache, ‘Just because you bought the Mona Lisa, doesn’t mean you have the right to paint a mustache on her.’ Our thoughts are with his family, his friends and the many people who loved him.”

Hiller had a hot streak in 1970 and 1971 with Neil Simon’s “The Out of Towners;” “Love Story;” much-lauded black comedy “The Hospital,” for which Paddy Chayefsky won best screenplay and George C. Scott received an actor nom; and “Plaza Suite,” a Simon adaptation of his own play.

The streak ended with 1972’s “Man of La Mancha,” starring Peter O’Toole and Sophia Loren, which drew neither critical acclaim nor significant box office. Hiller continued to direct until 2006 but never achieved the same level of success again.

Hiller directed a number of high-profile films in the ’60s, including “The Wheeler Dealers,” with James Garner and Lee Remick and, in 1964, well-received big-budget “The Americanization of Emily,” with Garner and Julie Andrews.

He made “Promise Her Anything,” with Warren Beatty and Leslie Caron, in 1965, and the light-hearted “Penelope,” with Natalie Wood, in 1966. The next year Hiller directed his only war movie, “Tobruk,” with Rock Hudson and George Peppard.

In 1976 Hiller helmed the biopic “W.C. Fields and Me,” starring Rod Steiger, and the popular comedy “Silver Streak,” with Gene Wilder and Richard Pryor. Also successful was his 1979 action-comedy “The In-Laws,” with Peter Falk and Alan Arkin, although his foray into horror that year, “Nightwing,” was a dud.

Hiller’s 1982 romantic-triangle drama “Making Love” wasn’t a hit but courageously addressed homosexual themes. He followed it up with “Author! Author!” with Al Pacino. His other films of the ’80s included Steve Martin’s “The Lonely Guy,”; “Outrageous Fortune,” with Shelley Long and Bette Midler; and 1989’s “See No Evil, Hear No Evil,” which reunited Wilder and Pryor but failed to live up to its high concept (Wilder’s character is deaf, Pryor’s blind).

He switched genres and made historical sports pic “The Babe,” with John Goodman, in 1992, then returned to comedy with “Carpool,” in 1996.

In 1997 came the complicated, Joe Eszterhas-scripted mess known as “An Alan Smithee Film: Burn Hollywood Burn,” a movie about making a bad movie that was as bad as its pic-within-a-pic.

“Love Story” star Ali MacGraw issued a statement on the news of his death on Wednesday: “Arthur Hiller was an integral part of one of the most important experiences of my life. He was a remarkable, gifted, generous human being and I will miss him terribly. My heart and love go out to his family.”

Born in Edmonton, Alberta, he served in the Royal Canadian Air Force from 1942-45, graduated from University College, U. of Toronto, in 1947 and received a Master of Arts degree in psychology in 1950. He began his show business career working for the CBC in Toronto in the early ’50s but eventually left for American television.

Hiller is survived by his daughter, Erica Hiller Carpenter, his son, Henryk, and five grandchildren. Gwen Hiller, his wife of 68 years, died in June.
-Staff Writers