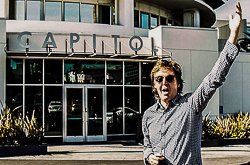 "This is genuinely exciting for me," McCartney said. "Not only was Capitol my first U.S. record label, but the first record I ever bought was Gene Vincent's 'Be-Bop-A-Lula' on the Capitol label."

The deal encompasses all of McCartney's post-Beatles work, from from his 1970 McCartney album, through his decade with Wings, to his later solo work, a catalogue which has sold more than 500 million records worldwide.

The contract will also include McCartney's new work, including his forthcoming studio album. As well, McCartney and his management team will work with Capitol to develop a comprehensive plan to exploit his catalog, with implementation for said plan to begin in July 2017.

Lucian Grainge, Chairman and CEO of Universal Music Group, said: "It would be simply impossible to overstate what an honor it is to welcome Paul back to Capitol. It's a homecoming of one of the greatest musical artists of all time to the label that first helped bring his incredible music to the world. Paul's astonishing career has shown no limits — in creativity, in commercial longevity, and in its impact on people and cultures in every corner of the globe. We are thrilled at both Capitol and UMG to be able to contribute to the next chapter in Paul's extraordinary career."