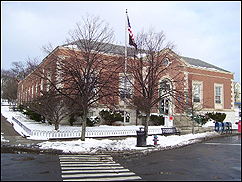 However, what Don Law plans for the site is unclear, but is said to be considering a hybrid arts venue and café/restaurant operation for the space. When the Boston Herald asked Law about his plans for the property, he replied:

"I honestly don't really have one[a plan], and I'm not being coy, we just don't know exactly what it will be. But I love the building… And I know food will be a major component. What I do know is that we're not going replicate any of our other spaces. We have the Opera House and the House of Blues and what we did down in Mansfield (Law was instrumental in the creation of Great Woods). Well, this won't be anything like those."

Whatever Law's plans are, there will be some restrictions on the use of the building. It is listed on the National Historic Register, is a designated Local Historic District, and it is protected by historic preservation requirements. According to a statement released by the city, Union Square Partners has also agreed to work with the City to ensure that the historic New Deal era mural in the building, which will remain U.S. Postal Service property, will also be preserved and that public has continued access to view it.

As well, Union Square Partners says it intends to work closely with the City, the Somerville Redevelopment Authority, the Union Square master developer partner US2, and the Union Square Civic Advisory Committee to develop a use for the building that dovetails with the city's overall plans for the neighborhood.

"The arts are both central to the character of Union Square and an economic driver in the city, so this is welcome news, certainly in light of some of the recent proposals for the re-use of the building. It also dovetails with the clear consensus to promote the arts that has emerged from our community processes," said Mayor Joseph A. Curtatone. "Bringing live arts to this landmark building would help us move toward this shared goal, and our public processes going forward will help ensure that we do so in a way that reflects resident priorities." – Staff Writers