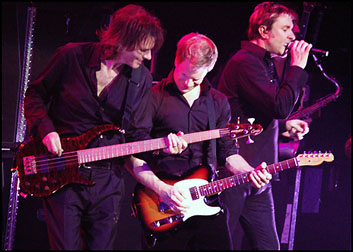 NEW YORK (CelebrityAccess MediaWire) — For a few weeks this fall, Broadway gets a visit from Rio.

Duran Duran, the band best known for its 1980s hits including "Rio," "Hungry Like the Wolf" and "Save a Prayer," will play nine career-spanning shows at Broadway's Ethel Barrymore Theater in November.

The show isn't likely to be eligible for Tonys, given the rules governing the awards' special theatrical event category. Requirements include a playing schedule approximating the Rialto's traditional eight-performace week.

The band, which features original members Simon Le Bon, John Taylor, Nick Rhodes and Roger Taylor, intend to play the new album in its entirety, as well as classics such as 'Rio', 'Hungry Like The Wolf' and 'Ordinary World', during their Broadway stint.

"We've always wanted to do something like this, and the timing seemed right," front man LeBon. "We have made an album that we are all really proud of and we wanted to present it in a very unique way," front man Simon LeBon says. "Staging a run on Broadway is something that we've often talked about over the years — but the time has never seemed right until now."

Producer Timbaland was behind the boards for "Nite-Runner," "Skin Divers" and "Zoom In." As keyboardist Nick Rhodes previously told Billboard.com, "I'm always personally really inspired by working with urban producers, more so than rock producers. They really bring something to the songs that we don't have completely covered, whereas with rock producers, often I find [they suggest] things we'd do ourselves naturally anyway."

Ducats will go for higher than the Broadway norm, with prices ranging between $75 and $150.

It's unusual but not unheard-of for concert or dance productions to rent a Broadway stage for a limited run. Duran Duran engagement comes before the Dec. 20 start of performances of the new David Mamet comedy "November," opening at Barrymore Jan. 17.