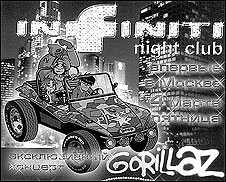 (CelebrityAccess MediaWire) — A promoter in St. Petersburg has EMI upset over their misleading use of imagery and music in print and radio advertisements for concerts on March 4 and 5, according to the St. Petersburg Times.

Gala Records, the Russian representative of EMI, which has the virtual-group Gorillaz on its roster, raised concern when it witnessed the advertising campaign using the Gorillaz logo on posters and the backing track to their hit “Clint Eastwood” in radio ads, despite the fact that the concerts were actually for lesser-known British act Phi-Life Cypher.

In a statement released by Gala Records, director Alexander Blinov wrote, “Any use of the Gorillaz logo and name in adverts, press releases and previews of the events under question is unlawful and misleads fans of the genuine Gorillaz.”

The concerts are promoted from St. Petersburg by booker and DJ Samir Askerov and Jet Set Holding that includes the club Jet Set.

The Russian-language news released for the events cite the official biography of Phi-Life Cypher and use the band’s photo, but refer to it as “Phi Life Gorillaz” and present them as “the full and only lineup of the virtual band Gorillaz.”

Jet Set’s press office had released a statement to journalists earlier claiming that Gorillaz had changed their name to “Phi-Life Gorillaz.” A magazine ad in Moscow referred to the band simply as “Gorillaz” and used the logo and cover art from their 2001 album.

When faced with the statement from Gala Records, Jet Set insisted that they had the right to promote the name “Gorillaz.” The statement also noted that the holding’s lawyers were going to check if anything in the record company’s statements apply as libel or defamation. Representatives from Gala Records did not appear worried about the suit.

“We welcome [the suit], let them go ahead,” Maria Yezhukova, Gala Records’ marketing director, told the St. Petersburg Times. “It would well end in court. We gave the contact information of the promoters to EMI, and they will start dealing with it themselves.”

The group that performed, Phi-Life Cypher, includes MC’s Life and Si-Philli and DJ Nappa. The group was apparently connected to Gorillaz in the past, creating a remiz of “Clint Eastwood” and appearing on a B-side track called “The Sounder.” They also supported the group on a tour of Japan. They are not, according to their label, Zebra Traffic, any part of the actual group Gorillaz.

According to the paper, Jet Set has gotten in trouble for misrepresenting acts in the past, including an appearance by DJ Phil Hartnoll, being passed off as a “full live performance” by his former group Orbital, who would reunite specially for this occasion. –by CelebrityAccess Staff Writers