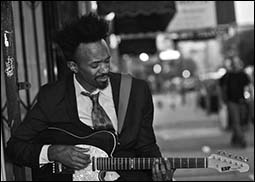 SAN FRANCISCO (CelebrityAccess) — Oakland-based roots musician Fantastic Negrito missed his performance at the Outside Lands music festival in San Francisco, as he was being detained for allegedly scalping artists wristbands at the time.

According to the The San Francisco Chronicle, police detained Fantastic Negrito, whose real name is Xavier Dphrrpaulezz, with two other individuals outside of the festival on suspicion of peddling without a permit. Acting on a tip from festival staff, police detained Dphrrpaulezz for allegedly selling complimentary non-transferable artist bands.

“It was a mistake a misunderstanding and the fans lost,” Dphrrpaulezzsaid wrote on his Twitter account after the incident.

“The kid probably needed the money rent is high in the bay,” Dphrrpaulezz said via Twitter. – Staff Writers