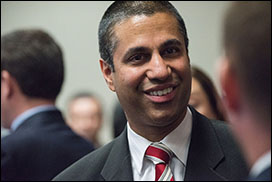 WASHINGTON D.C.(Hypebot) – Controversial FCC chief Ajit Pai has drawn fire from the music and tech industry for leading the charge to dismantle new neutrality. Now Pai is facing the biggest threat to his short rein yet with new that the FCC has launched an internal investigation into his “too close” relationship with the media and other companies he’s supposed to be regulating.

By Karl Bode of Techdirt

If you watched FCC boss Ajit Pai’s rushed repeal of net neutrality there really shouldn’t be any question about where Pai’s loyalties lie, and it certainly isn’t with smaller companies, healthy competition, transparency, openness, innovation, or American consumers. The agency head repeatedly lied about the justifications for the repeal, casually using fabricated data to justify what may just be the least popular policy decision in this history of modern technology. Pai’s fealty to giant monopolies runs so deep, his agency now just directs reporters to lobbying talking points when they question the flimsy logic propping up the repeal.

So for those paying attention, it’s probably not too surprising to see news that the FCC’s own Inspector General is investigating the agency boss for being a bit too cozy with the giant companies he’s supposed to be holding accountable:

“Last April, the chairman of the Federal Communications Commission, Ajit Pai, led the charge for his agency to approve rules allowing television broadcasters to greatly increase the number of stations they own. A few weeks later, Sinclair Broadcasting announced a blockbuster $3.9 billion deal to buy Tribune Media — a deal those new rules made possible.

By the end of the year, in a previously undisclosed move, the top internal watchdog for the F.C.C. opened an investigation into whether Mr. Pai and his aides had improperly pushed for the rule changes and whether they had timed them to benefit Sinclair, according to Representative Frank Pallone of New Jersey and two congressional aides.”

Sinclair’s $3.9 billion acquisition of Tribune Media has already faced broad, bipartisan opposition by those concerned that the merger will dramatically damage both competition and opinion diversity across countless markets nationwide. The Sinclair Tribune tie up would give Sinclair ownership of more than 230 local broadcast stations around the nation, allowing it to reach 72% of the public with “reporting” frequently lamented as grotesquely distorted on a good day.

Sinclair’s latest merger couldn’t occur without Pai’s decision to gut numerous media consolidation rules over the last few months, including several decades old rules specifically designed to prevent any one company from unfairly dominating a media market and crushing local competition. Unsurprisingly, consumer groups were quick to seize on the news suggesting that the agency should suspend its review of the merger until the Inspector General inquiry is complete:

“Until the inspector general’s investigation is complete, Chairman Pai and any other FCC staff subject to this inquiry should recuse themselves from all dealings related to Sinclair’s proposed takeover of Tribune Media,” Free Press Senior Counsel Jessica J. González said in a statement. “If the investigation finds that Pai or any other FCC staff did indeed let their own bias and favoritism shape decisions related to the deal, they must not be permitted to vote on this matter and they should be subject to other appropriate ethics-review processes.”

Of course, if you’re familiar with Pai’s work, you know that won’t be happening, and in Pai’s ideologically-blinded brain this will all be dismissed as the errant rantings of partisans. But again, opposition to this deal is fairly uniform across the spectrum. Conservatives don’t like it because they realize Sinclair is going to squeeze smaller media outlets out of the equation unfairly. Liberals don’t like it because they know Sinclair is going to fill the airwaves with more nonsense just as we’re trying to get a hold on problems inherent in foreign influence, disinformation, and discourse quality.

Regardless, Pai’s going to have a very busy few years. He’s already facing several different inquiries into why his agency made up DDOS attacks and turned a blind eye to identity theft as part of an apparent attempt to downplay massive public opposition to his policies. He’s also facing several law enforcement inquiries (one of which he’s actively blocking) and numerous lawsuits into his agency’s blatant disregard of the public interest. And while this particular inquiry may not conclude that Pai technically broke the law or violated agency rules, it’s pretty hard to act confused about where Pai’s loyalties truly lie.