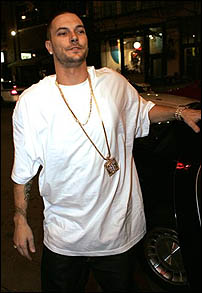 COLUMBUS, Ohio (AP) –Britney Spears no longer wants him as her husband and audiences have been cool to his attempt at a rap music career, but Kevin Federline has Nationwide on his side.

Nationwide Mutual Insurance Co., known for its "On Your Side" slogan, plans to run a national ad during the Super Bowl, and K-Fed has been tapped to star, the Columbus-based company announced Wednesday.

The 30-second spot, to air during the third quarter of the Feb. 4 game, will be the latest installment in Nationwide's "Life Comes at You Fast" ad campaign. Previous celebrity ads in the series have featured Fabio and M.C. Hammer.

In the new commercial, Federline, 28, goes from starring in a rap video surrounded by beauties and bling to working at a fast-food joint.

"No one has personified `Life Comes at You Fast' in the media better than Federline," said Steven Schreibman, Nationwide vice president of advertising and brand management. "Our partnership with Kevin shows the world that he has a great sense of humor."

Spears, 25, filed for divorce from Federline in November after two years of marriage. The couple agreed to share custody of their sons, 3-month-old Jayden James and 1-year-old Sean Preston, for this month, but after that, Federline will be allowed visits three afternoons per week.

His debut rap album, "Playing With Fire," sold a dismal 6,500 copies in its first week of release last fall.