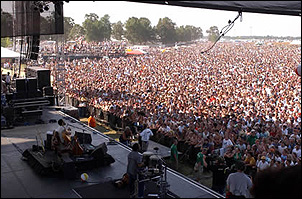 The initial lineup, 32 out of the expected 60 acts, for the second annual three-day music and camping 2003 Bonnaroo
Music Festival June 13-15, has been set. It will be held on the same pristine 600-acre farm in Manchester, Tennessee, 60 miles south of Nashville. Last year, 70,000 tickets were sold in 19 days with no traditional advertising.

The confirmed artists are

Bonnaroo is produced by Superfly Productions in association with A.C. Entertainment. "Our goal is not only to present the best established live performers, but also to be a springboard for the next generation of great artists to reach a national audience," says Superfly's Rick Farman. "The Bonnaroo audience is extremely dedicated. Once they are turned on to an artist, they will support them feverishly."

"Bonnaroo is much more than a mere concert," says Ashley Capps of A.C. Entertainment, "It's a total entertainment experience."

The Coachella Valley Music and Arts Festival returns for its fourth year April 26-27 at the Empire Polo Fields in Indio, CA. Last year it attracted 55,000 music fans for the Goldenvoice-promoted extravaganza being headlined this year by Beastie Boys on April 26 and the Red Hot Chili Peppers on April 27.

In addition, this year's festival marks the hotly-anticipated Southern California debut of Fischerspooner–who'll also be screening their documentary #1 and doing a Q&A with fans–while Blue Man Group will perform on both days in what represents the debut of their new full-production concert tour.

There will be two musical stages and in two dance tents spread out over 78 acres amid gorgeous desert sunsets, towering palm trees and mountainous views. General admission tickets for each day are priced at $75.00, with a limited amount of 2-day tickets available for $140.00. In the Coachella festival tradition, there is free parking and the doors to the venue will open at noon on both days. Parking lots open at 10:00 AM.

"It's been amazing to watch Coachella grow and to receive such positive feedback from the artists, the fans and the media, "> says Goldenvoice's Paul Tollett. "We take true pride in this year's line-up. There are performers from around the world, like Mexico, Sweden and Germany as well as North America and the U.K. We strive to present great music in a hassle-free, comfortable environment with nice weather."

In an interview with the Los Angeles Times on February 16, Tollett said, "There's no one flavor on any stage. People go back and forth, and we try to stagger the set times. Last year we did pretty well in not having things too similar playing against each other."

The addition of a day of Thursday performances to Jazzfest's first weekend created 80 additional performance slots for the festival's 34th year. Louisiana artists will fill most of the new slots, said Quint Davis, the festival's producer and director.

The festival includes all-day concerts at stages throughout the infield of the Fair Grounds race track, as well as evening concerts at venues around the city.

Jazzfest's international focus will be on the Caribbean island of Martinique. The Plastic System Band, a marching troupe featured in Martinique's annual Carnival, is slated to parade around the Fair Grounds.