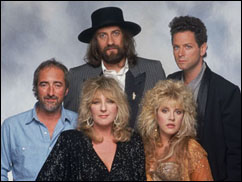 LONDON(VIP NEWS)In the wake of Lindsey Buckingham's latest solo project, Fleetwood Mac is gearing up for a tour in early 2009 that will likely be followed by a new band album.

Buckingham — who releases "Gift of Screws" on Sept. 16 via Warner Bros. and begins a solo tour Sept. 7 in Saratoga, Calif. — tells Billboard.biz that Fleetwood Mac will convene in January to begin rehearsing for the tour, whose itinerary is currently being assembled. It will be the group's first outing since promoting the "Say You Will" album in 2003 and 2004.

"There was no sense we had to jump right in the studio," Buckingham reports. "I think maybe there was even a sense that we would make a better album if we went out and hung out together first on the road … maybe even sowing some seeds musically that would get us more prepared to go in the studio rather than just going in cold. It takes the pressure (off) from having to go in and make something cold."

Contrary to previous reports, however, the Fleetwood Mac tour will not include Sheryl Crow, who spoke of the possibility of being part of the group while promoting her most recent album, "Detours." Buckingham says the matter "kinda got out of hand," though there were discussions between the Fleetwood Mac members and Crow. Ultimately, he says, the prospect "just kind of lost its momentum."

"I think with Stevie (Nicks) … maybe to some degree there was a little too much testosterone on stage when we went out in 2003," Buckingham notes, "and I think the band was looking to kind of balance that out a little bit.

"I think the good side has been, for Stevie, she came to a point of clarity where she realized the most appropriate thing we could do as a band was to create what needs to be created in the context of the four of us. That's been a real positive, and it's been a real rallying point for all of us, too."

The Fleetwood Mac rhythm section of drummer Mick Fleetwood and bassist John McVie appears on three songs on "Gift of Screws," which was the title of a solo album Buckingham was working on before Fleetwood Mac decided to record "Say You Will," according to Billboard