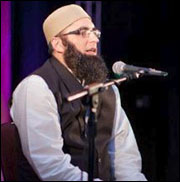 CHITRAL, Pakistan (CelebrityAccess) — Junaid Jamshed, one of the best known figures in the admittedly small world of Pakistani pop music, was killed in a plane crash on Dec. 7th. He was 52.

Jamshed was one of 48 people aboard PIA Flight 661, a domestic flight from Chitral to Islamabad when it crashed shortly after takeoff. Also aboard the plane were several members of Jamshed's family.

Jamshed first rose to prominence in the music world as the vocalist for pop group Vital Signs, who scored a major hit with Dil Dil Pakistan. The success of the song made it Pakistan's unofficial national anthem and helped to foster a rock scene in the central Asian country.

Jamshed followed up his success with Vital Signs with a solo career, recording four albums but running into career headwinds internationally in the wake of the 9/11 attacks.

In 2004, he turned his focus to religion, preaching on television and recording religious music, though he still made occasional appearances, including a live performance in Toronto in 2011. – Staff Writers