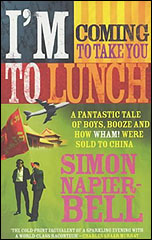 (CelebrityAccess MediaWire) — Former manager Simon Napier-Bell did the unthinkable and brought a pop music group into communist China in the 1980s – a PR coup that helped make Wham! into one of the biggest groups in the world. With an obsession for everything relating to the 80's, Napier-Bell has penned, " I'm Coming to Take You to Lunch: A Fantastic Tale of Boys, Booze, and how Wham! Was Sold to China (Wenner Books, 293 pages, $14.95).

Napier-Bell tells the fascinating tale of Wham's rise to fame – from the first time he met the two young musicians Andrew Ridgely and a budding George Michael in London to his wild romp around the world that brought the British duo to international stardom. Through wild tales of traveling to China more than 20 times in three years and dealing with an extraordinary assortment of people from heads of government to seedy CIA operatives, Napier-Bell takes readers on a Far Eastern adventure detailing how he accomplished his diplomatic feat to launch a band.

Napier-Bell briefly managed the Yardbirds in 1966 post Giorgio Gomelsky and co-wrote Dusty Springfield's hit "You Don't Have to Say You Love Me" also in 1966. He produced a few records, discovered and managed Marc Bolan and managed Japan and London. He claims to have spurned Julio Iglesias before discovering Wham!

This is Napier-Bell's third book, having previously written "Black Vinyl, White Powder," and "You Don't Have to Say You Love Me." Strangely though, for a tome about rock icons, there are no photographs in the book except one of the author. Napier-Bell lives in Thailand. — Bob Grossweiner and Jane Cohen