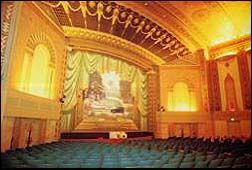 Pasadena, CA (CelebrityAccess Staff Writers) — December 16, 2004 – The California Preservation Foundation has awarded Pasadena-based preservation organization Friends of the Raymond Theatre the 2004 "President's Award" for their 17-year effort to preserve Pasadena's Historic Raymond Theatre (aka Perkins Palace). The award is the highest award in the State of California presented in the field of historic preservation.

President, Gina Zamparelli, stated, " when we set out to preserve the Raymond Theatre, we never imaged the impact this one theatre in Pasadena would have upon so many! This project has come to represent what's possible when people work together to protect the places of our past. We are very grateful to the California Preservation Foundation for bestowing our organization with this award and equally thankful to our supporters who allow us to continue our goal of preserving the Raymond Theatre."

The Raymond Theatre is the oldest surviving theatre in Pasadena, California and it is listed on the National Register of Historic Places. It opened its doors in 1921 and quickly became one of the West Coast's premiere theatres. It operated initially as Jensen's Raymond Theatre, presenting vaudeville programs and motion pictures, later becoming the Crown Theatre, showing movies and stage shows. In recent years, it was known as the concert venue Perkins Palace which presented some of the biggest names in entertainment such as Bruce Springsteen, Phil Collins, Fleetwood Mac, Willie Nelson and Tina Turner.

Friends of the Raymond Theatre recognizes the importance of preserving the Raymond Theatre because of its long history of being a self-sustaining profitable venue, its role as the last 2,000-seat venue in the San Gabriel Valley, its need in the community and its historical and cultural significance.

Friends of the Raymond Theatre has not just advocated for preservation but have taken an active role in finding solutions. Over the past 17 years the group has provided the City of Pasadena, the developer and interested buyers with extensive business, financial, marketing, operational and demographic studies. They have secured a major concert promoter as a tenant, and have a management team and corporate sponsorship broker in place for a potential buyer. Friends of the Raymond theatre has brought over 30 buyers to the project and completed all due diligence on the property for permits, code work and restoration.

Friends of the Raymond Theatre has engaged both celebrities and entertainment business professionals in the project. They also legally defend the theatre and have two lawsuits currently in the courts. The project is supported entirely by donations from the public and fundraising events.