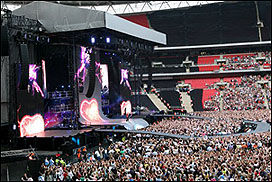 LONDON (CelebrityAccess MediaWire) — Apparently putting his recent legal troubles behind him, George Michael wowed his fans as he opened the newly remodeled Wembley Stadium on Saturday.

The former lead singer from WHAM! has been enjoying a highly successful tour in recent months, counter-balanced against legal problems stemming from a marijuana arrest after London police found him slumped at the wheel of his vehicle. Michael was sentenced to community service for his offense only the day before the Wembley concert.

Embraced by warm enthusiasm from the assembled crowd, Michael played a variety of old favorites and new hits, including "Shoot the Dog," a song about the apparently convivial relationship between ex prime minister Tony Blair and U.S. President George Bush during which a giant, inflatable cartoon G. Bush featured on stage. The second half of the concert was broadcast on British television.

"I'm actually here, I don't believe it," Michael told the crowd "For the most amazing, God-given 25 years, I thank you all."

Wembley is now one of the largest concert venue in Europe,second only to Camp Nou in Barcelona and the single largest stadium with all seats sheltered from weather. Upcoming shows planned for the new facility include Muse on June 16 & 17, a tribute concert to the departed Princess Diana, organized by her scions, scheduled for July 1st and then London's installment of Live Earth, planned for July 7th. – CelebrityAccess Staff Writers