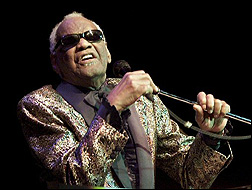 ATLANTA (AP) — The late Ray Charles and Bill Lowery will be honored by the Georgia Music Hall of Fame Sept. 18 during a ceremony when the hall also will induct four new members.

The ceremony will be a tribute to famed singer Charles and music publisher and entrepreneur Lowery, both of whom died this year. Both were members of the first group to be inducted into the Hall of Fame in 1979.

"Georgia has a rich music heritage and an event like this brings that history and our great talent into the spotlight," said Greg Torre, director of the Georgia Department of Economic Development's office of film, video and music.

Jarrett started in the music industry in the 1950s with a group known as the Jordanaires, the back group for Elvis Presley. He was inducted into the Gospel Music Hall of Fame in 1999.

Leavell was recognized primarily for his work as piano player for the Rolling Stones.

Williams, who was involved in jazz for seven decades, wrote for Louis Armstrong in the 1920s. After Williams died in 1981, "Soul on Soul," an online exhibit of jazz musicians, was created in her remembrance.

Dobbs made her debut in 1953 as the first black artist to sing at La Scala in Milan, Italy, performing as Elvira in Rossini's "L'Italiana in Algeri."

This is the 26th year the Georgia Music Hall of Fame has honored musicians and music industry professionals who are Georgia natives or live in the state.