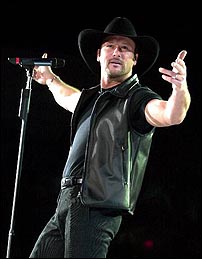 (CelebrityAccess MediaWire) — Tim McGraw's new album, Live Like You Were Dying, debuts at #1 on both the Billboard Country Albums Chart and Top 200 Albums chart with a personal sales best of 765,739 in just its first week of release. This marks the third time that McGraw has simultaneously debuted at the top of both charts. Besides becoming one of the fastest selling album debuts since the inception of Nielsen Soundscan, which began in 1991, Live Like You Were Dying has created a ripple effect of McGraw #1's. These include the #1 spot on the Country Catalogue Album Chart (Greatest Hits), Country Singles Chart ("Live like You Were Dying"), for a record tying 9th consecutive week, as well as the #1 Pop and Country Album Chart positions in Canada. It is McGraw's seventh #1 country album.

"I want to extend a special thank you to everyone that contributed to the set-up of this album including Carson James, Eva Wood, April Rider, Rick Rockhill, Joe O'Donnell, Karen McGuire, Benson Curb and Jeff Tuerff at Curb Records," says McGraw. "We could never have achieved this success without an astonishing song and the greatest fans in the world."

"An amazing song and a tremendous game plan combined for an incredible first week," says Curb Records Benson Curb, vice president of sales. "The excitement level up and down the entire retail spectrum led to immediate re-orders as the new record was flying off the shelves."