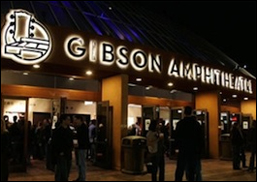 UNIVERSAL, CA (VIP NEWS) — Live Nation has confirmed that the iconic Gibson Amphitheatre in Universal City, California., will shutter in September as a result of the building’s lease agreement coming to an end.


The company says the last concerts at the 6,000-capacity venue will consist of “very special” lineups. Specific details are forthcoming.


The Gibson could be leveled as early as October to make way for a Harry Potter attraction at Universal Studios Hollywood. It’s been presumed for months that the amphitheatre would need to come down, since NBC Universal has been saying that it’s joint-venture attraction with Warner Bros. called The Wizarding World of Harry Potter was to be built at the north end of the park, which is where the venue resides. Live Nation leases the venue from NBCU.


“We, like music lovers across Los Angeles, will miss Gibson Amphitheatre,” Bret Gallagher, president of North American concerts at Live Southern California/Las Vegas, said in a statement. “It is a tremendous venue with a uniquely intimate setting that has made it a very special place for fans and artists alike. The list of musicians that have played here is simply staggering. We are honored to have been a part of its remarkable story. While a change like this is difficult, we look forward to putting together a series of great shows that will celebrate everything about this marvelous building.”


When the Gibson closes its doors in September, the Greek Theatre, booked by Nederlander Concerts, will stand alone in Los Angeles as a mid-sized amphitheater-style venue.


Alex Hodges, CEO of Nederlander Concerts, who booked Universal under its former operator House Of Blues Concerts, tells Billboard.biz, “The Greek Theatre is open for business. We have a great summer and fall, and great relationships with artists and agents, and also more holds already than any year I can remember. I had a great time booking Universal and also the Greek before, and now the Greek since 2007. We look forward to some co-promotions with our friends in some


Performances scheduled at the Gibson through December 2013 include three Vicente Fernández concerts (April 26-28), Alice Cooper/Marilyn Manson (June 6), Goo Goo Dolls/Matchbox Twenty (July 17), Jonas Brothers (Aug. 16), Sarah Brightman (Nov. 1) and the Charlie Daniels Band (Dec. 12). Fans who have already purchased tickets to concerts after September are urged to keep them while Live Nation works to move the events into other Los Angeles venues. If the shows cannot be moved, fans will receive a full refund.


The Gibson, originally named Universal Amphitheatre, opened in 1972 as an outdoor venue. Ten years later it reopened with a roof. The theater was renamed the Gibson Amphitheatre when it acquired the naming rights in 2005. Gibson will surrender naming rights when the venue is shuttered but NBCU did not say whether the guitar and musical instruments retailer was due a partial refund or not.


Over the years, the venue has hosted such legendary acts as Frank Sinatra, Bob Marley, Johnny Cash, Miles Davis, Bob Dylan, David Bowie, Madonna and Stevie Wonder. Contemporary artists included No Doubt, Bruno Mars and One Direction. It has also been the home to other events, including the MTV Music Awards, Teen Choice Awards, VH1 Honors and the Academy of Country Music Awards. — According to Billboard