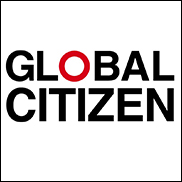 Other performers on the bill include Pharrell Williams, Big Sean, Andra Day and Alessia Cara, with more to be announced over the coming weeks.

The festival, an annual free-ticketed event held on the Great Lawn in New York City's Central Park, is slated to take place on Saturday, September 23, 2017 and will be produced by Live Nation.

Hugh Evans, CEO of Global Citizen, said, "Over the last year, we've seen voters around the world reject the nationalism and isolationism that keeps people living in extreme poverty. Now, we are calling on activists and music fans to use their voice to change the world. We couldn't be more thrilled to be announcing this incredible lineup for Global Citizen. Now more than ever, we need to ensure we work together for the world’s poor."

“Thanks to the passion of artists and their fans, music has the power to transcend borders and unite people. Live Nation is proud to help the music community come together to make the world a better place through efforts like Global Citizen Festival,” added Michael Rapino, President and CEO, Live Nation Entertainment.

This year's festival will be livestreamed on on YouTube and Twitter and MSNBC & Comcast NBCUniversal will air a live simulcast of the Festival on MSNBC and MSNBC.com.