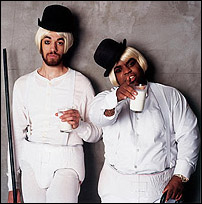 AUCKLAND (CelebrityAccess MediaWire) — After some stops in the U.S., Gnarls Barkley will head across the Pacific for some dates in Australia and New Zealand. Gnarls had the #1 song in New Zealand in 2006 with their hit "Crazy".

They will be making a short circuit before scheduled appearances at the V Festival, both at the Sydney and Gold Coast festivals.

The Rapture will be touring in support of Gnarls.