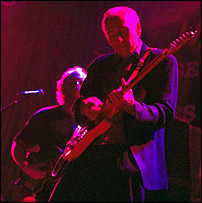 A message from Little Silver Records:

It is with a very heavy heart that we have to report the passing of our dear friend and former "Graham Wood Drout & Iko-Iko" band member, Larry Williams. Larry passed away on Sunday, April 22, 2007 surrounded by family after losing his sudden unexpected battle with cancer.

"The Panama City Chainsaw," as Graham often referred to him, was known for his incredible lead and slide guitar work on stage and in studio with Iko-Iko (from 1990 – 2002), James Harman, Bo Diddley, Jimmy Buffett and many other of music's greats. Larry was also a brilliant visual artist who's photo-realistic freehand images have appeared on album covers, custom musical instruments and his commissioned pieces. His legacy is his wonderful body of work, his family and his friends, but the loss leaves a large void in all of our hearts.

We are deeply saddened by this loss, but retain the joy of who he was, his talents and our times together.

A special section of the Iko-Iko online forums was created for those who wish to post appropriate memories and messages. – CelebrityAccess Staff Writers