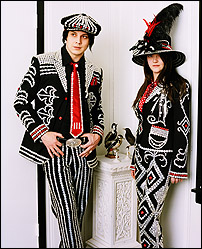 WILMINGTON, DE (CelebrityAccess MediaWire) — In a departure from the mostly large capacity venues that three-time Grammy Award winners, the White Stripes will be playing on their upcoming 2007 tour, it was announced yesterday that the band will perform live at the 1200 seat Grand Opera House in Wilmington, Delaware on Friday, July 27 at 8pm. The appearance will be a part of their first tour since fall of 2005. The Grand, a relatively compact venue for rock artists of this magnitude, was selected for the tour in part because of bandleader Jack White's interest in playing in some of the states where the band has never performed.

"The fact that this band will play Madison Square Garden three nights before appearing at The Grand really puts the magnitude of this event in perspective for all of us here in northern Delaware " says Steve Bailey, The Grand's executive director. "The White Stripes are one of the most influential and attention-getting bands in rock music today and the concert at The Grand will provide a unique opportunity to share this band's music in an intimate setting. Our staff works so hard to present music that matters, but we rarely get an opportunity like this and we salute the Whites Stripes for giving the 'little guy' a chance." – CelebrityAccess Staff Writers