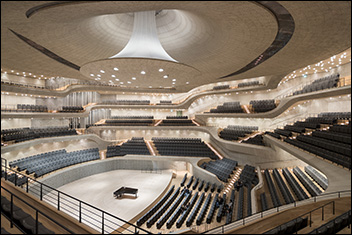 HAMBURG (CelebrityAccess) — After more than a decade of delays and budget overruns, Hamburg's long-awaited Elbphilharmonie concert hall debuted for its first concert on Wednesday.

The grand opening, a concert by the NDR Elbphilharmonie Orchester, sold out quickly, and more than 500,000 tickets for events in the first half of the year have already been sold, according to the Associated Press.

In addition to Wednesday’s concert, the grand opening will include concerts by the Chicago Symphony, under Riccardo Muti; recitals by Mitsuko Uchida and Brad Mehldau; and two performances by the German experimental electronic group Einstürzende Neubauten (whose name translates as “Collapsing New Buildings”).

First proposed in 2003 with an estimated cost of about 75 million euros ($80 million), the construction of the hall was beset by logistical and legal delays while its budget bloomed to 790 million euros ($835 million) by the time it was complete.

Programming at the concert hall will range from traditional symphony concerts and operas to modern improvisations and electronic music with the intention of making the performance space accessible to everyone.

"I firmly intend that … all children who go to school in Hamburg will have once heard a concert at the Elbphilharmonie," Hamburg Mayor Olaf Scholz said, according to the German news agency dpa. – Staff Writers